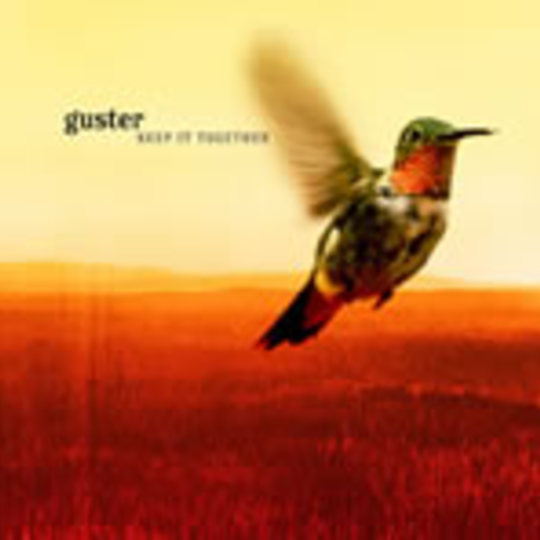 I had the pleasure of seeing Guster in concert about a year ago now (wow, time flies by so quickly doesn't it?), when they played Cornell University in good ol' Ithaca, NY. Rufus Wainwright was up first as the show's opener, but was quickly forgotten as soon as the fun-lovin' trio took the stage. The guys were amazing, playing to a gynasium of at least a thousand or so kids from both of the town's universities, and even though you knew they had played more shows than they could count, somehow this one felt like it was just for us (especially when the lead singer donned the infamous 'Ithaca is Gorges' t-shirt that some fan had tossed on stage).

But, I digress....Adam (guitar/vocals), Ryan (guitar/vocals), and Brian (drums) all met their first year at Tufts University in the early '90s. The trio named themselves 'Gus' and starting writing up some songs which they quickly recorded on cassettes (remember those?) which they then hocked while playing in Harvard Square, that is, until the 1996 noise ordinance forced them out. They soon had to change thier name to 'Guster' when another artist who was named 'Gus' got himself a big record deal. Thus, Guster was born and soon scored a record deal of their own with Sire Records. They release a few albums, ('Goldfly,' 'Parachute,' 'Lost & Gone Forever'), and now, 'Keep it Together.' The UK release of 'KiT'_ on Fenway Recordings, will be out 16 May, and will include two new bonus tracks ('Starless Heaven' and 'Say That To My Face').

The record itself definitely has that typical Guster-feel to it: college radio-esque, fringing into alternative, and bleeding into garage band rock/pop. But, at the same time, there's something different about it, something not as catchy and sharp as 'Lost & Gone,' something more grown-up about it? The songs still have their catchy, resonate-in-your-head sort of appeal, but the intrumentation sounds different. Much of the album is guitar-driven, with only a few songs highlighting their amazing drummer's ability at playing a wickedly creative drumset with just his bare hands. The group also use a variety of different sounds throughout this record (many that weren't as pronounced on their last album), including the harmonica, flugalhorn, clarinet, and Jew's harp. The melodies are still light, and the harmonies are still there, as are the lyrics which beg for a second listen once the album has run to the end. 'Careful' and 'Amsterdam' were the two radio friendly tracks back in the States when it was released there, while songs like 'Diane,' 'Backyard,' and 'Come Downstairs and Say Hello' provide the chill, musical creativity that Guster has come to be known and loved for.

Overall, you can still expect the same and more from Guster on this very summery record: tempo changes that will catch you off your guard, melodies that will stay in your head forever, and lyrics that may seem simple, but actually go deeper into life than you originally thought they did.

The group will be touring the UK in support of the 'KiT' record, and will be at the following venues:

Go check them out. 'Cause, you know, Guster is for Lovers.

Lyca Sleep, The Fakers at The Mill, Mansfield, Mon 02 May