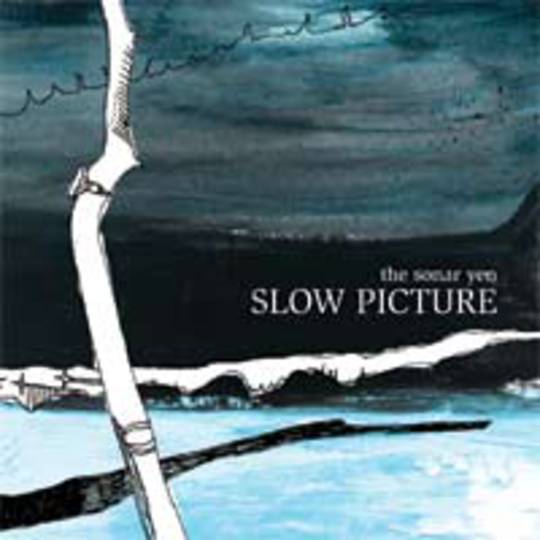 Sitting down to write this review of The Sonar Yen’s debut LP, I wondered if I could get through a without mentioning Sonic Youth. I thought it might be a challenge. But fuck it, Sonic Youth’s influence is all over the Sonar Yen sound. Two songs on this LP remind me of the sainted Youth’s 'Sunday' and the coda to 'Lacklustre' is a total submission to the influence. This doesn’t matter, because it still sounds mean.

‘Slow Picture’ is three quarters of an hour of introspective, multi-layered, studied garage rock, prone to bouts of thrilling thrash and sulky, surly dissonance. The album peaks with ‘Christian Lies’, which features the very pithy line ‘You create the problems and can’t control them anymore’ and a serrated one-note guitar break, which tears in to release the caged soul of the Sonar Yen sound. Songs should cut through, impact, and this one does, improving the LP substantially in the process.

Then there’s ‘Velvet Jesus’, with its standout chorus refrain, ‘Nothing I see / Connects with me’ and its murderous buzz-fuzz bass. ‘God is only inside your head’, sneers Mike O’Neill; the band take a sonic step back, to consider the implications of this statement. They think about it for thirty seconds, before finding the right answer and slamming back into the chorus riff.

These are memorable songs, but in truth, the LP doesn’t always hit such heights. ‘Magic Routine’ is possessed of the brightness of The Sonar Yen’s better material, but is the first track to end up sounding overly derivative. Following on its heels, ‘Lost Highway’ is equally energetic, but is let down slightly by O’Neill’s lyrics. Rhyming ‘As strange as it may seem’ with ‘Only I can hear my screams’ is a bit gothic and strikes a false note. It’s not the only occasion upon which the lyrics become meaningless, by straying too far into ennui, that starkly vague state of mind, wherein nothing is particularly worth thinking about or doing. All well and good in its place, but at this point in time, O’Neill is still allowing his existential angst too much rein.

He’s a better lyricist when he quits following the metaphysical chimera and actually finds some subject matter. ‘Talkin About Bob’ is a welcome curveball, striding in with a most un-Sonar Yennish, bouncing bassline and slick chorus. I’m hazarding a guess that the song is about the godhead Dylan and I’m sticking to my interpretation. Otherwise, I have no idea what could be meant by ‘Sixty-nine and still not free / Sixty-nine, still calls to me’. Well, Bob’s about sixty-nine years old, isn’t he?

The bright and intrinsically enjoyable closer ‘The Future’ is equally good, signalling a bright, um, future for the SY musically, even if O’Neill does choose to accompany the deft and comparatively light guitars by singing ‘Is this the future? / Send me back’. He has cause to be a lot more optimistic than allows himself to be. As leader of a band who have undoubted style and creative intent, his future is in his own hands. If he can find a positive, forward-looking mindset to transmit (and Christ you know it ain’t easy), then the Sonar Yen could really cut loose.