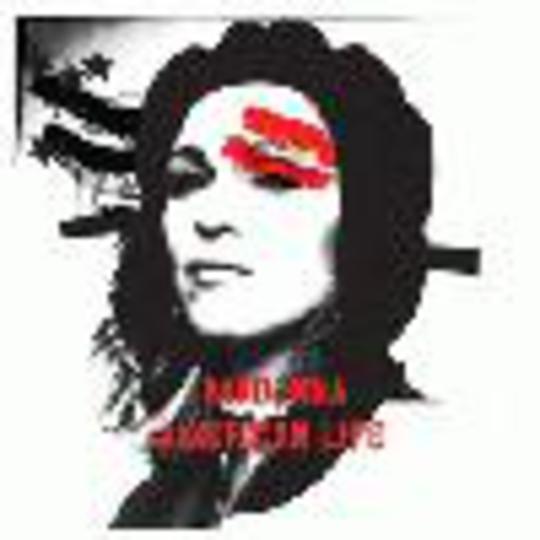 I’m never gonna stop ‘till I get my fill

It’s what you do that takes you far...

I’m not afraid to say I hear a different beat

You know that smell you get when you drag a dead body through a pine forest on a fresh spring morning? Yes? Well, there’s a whiff of that about Madonna’s new album.

Not much has changed then, the new sprouting up around the discarded old is one of the constant things about Madonna. The shedding of skin and the continual ability of self reinvention is why, many say, she is still here, not just making records but selling them, not just being mentioned but being talked about, not just continuing but mattering.

But that isn’t really it, I mean if ’reinvention’ is all it took then David Bowie would still be having hits. Sure, rummaging through the dressing-up box in time for every new album is good pop smarts, but the reason why Madonna is still number one, still top of the pops is that unlike, say - well, I’ve mentioned him now, so - Bowie, she has never given up on Pop Music, never lost that hunger that is needed to keep up with the constant fluxing and refracting, darting and spinning and sparkling that makes pop the single most vital and exciting and alive of all musics.

One curious thing about her is that her evident calculatedness, her shark-like remorselessness and her aloofness has never dented her immense popularity. She doesn’t have the girl-next-door approachability of Kylie or the pin-up cool of Debbie Harry, she isn’t even that sexy! I’ve been listening to her records all my music-listening life and I’ve just realised that I’ve never [really] fancied her. At times she has appeared as cold as a glacial lake yet her standing as an enduring, hit-making contemporary pop icon is second to absolutely none. During the 1980s she reigned as a pop titan alongside Michael Jackson and Prince. I need hardly detail the embarrassing acts of hubristic career/self-destruction carried out by the latter two since their heyday, but Madonna is the only one whose star has yet to wane. Yet if her early critics were to be believed her position now could only have been as, possibly, a kitsch ‘80s nostalgia queen as part of a comeback package tour or still singing ‘Dress You Up‘ and ‘Lucky Star’ to the faithful at G-A-Y or something.

Admittedly her flame sputtered briefly during the mid-’90s: all those boring singles and the flat, disastrous ‘Bedtime Stories‘ album, but since ‘98’s glorious ‘Ray Of Light’ she has continued with a renewed vigour. ’American Life’, then, sees her reafirming her Queen Of Pop status, and, behind the immense pop peak of the ’Like A Prayer’ LP and the aforementioned ’Ray Of Light’ it’s as good as anything she’s ever done, which is as good as anything anyone has ever done.

So then, album number - fucking hell - ten sees her wringing the last droplets of usefulness from co-producer Mirwais Ahmadzai, and turning out the best - only? - attempt at an electro-folk album since Saint Etienne’s sublime ‘Tiger Bay’. First track, the lip-smacking ‘American Life‘, unfurls the album’s bejewelled, multi-textured cloth: breezy, sun-dappled acoustic guitar strolls sharply juxtaposed or elegantly fused with Ahmadzai’s stuttering, strobing, staccato electronic squall. The best examples of this synthesis are ’Love Profusion’ and ’Hollywood’: two such nectar-laden pop blooms which have all the dashing whirl and giddying pull of a fairground waltzer, and likewise could only be hated by a dullard or a churl, have Madonna pouring robo-diva soul all over Mirwais’ perverse alchemy. But that’s not all...

There’s ‘Nobody Knows Me’ and ’I’m So Stupid’ and Mirwais’ fiercest nu-old skool rhythms are striking are slicing are squawking are sparking. ’X-Static Process’ and ’Easy Ride’ are a move away from the pulsebeat, are acoustic, tender, wistful waves and are as fragile as fading rainbows. There’s Madonna’s brassneck in hiring the London Community Gospel Choir just to get them all to sing “I’m not religious” in ‘Nothing Fails‘. There’s the bit in the title track where the brilliant mad Madge rap (the much criticised part that sounds a bit like Missy Elliot’s rap in ‘Funky Fresh Dressed’ from the vastly inferior and overrated ‘Under Construction’ LP, which I don’t remember anyone moaning about. Funny that) suddenly drops into a weightless space when she sings “..and I just realised that nothing... is what it seems” and Mirwais’ mental machinations buzz and whirr and WHEEYAW BD-RDDRRR WHEEYAW BD-D-DUMMM-DMM WHEYYAWWWW...

Neil Tennant once dreamt of “Ché Guevara and Debussy to a disco beat”, well, with her latest image as a kohl-eyed Ché-alike it seems that ’American Life’ sees Tennant’s dream become, at least partially, a reality (okay, there’s no Debussy, maybe next time). But the cover image seems to signal more than just Madonna’s latest look, it is also an indication of her intent here. The cover of ‘Ray Of Light’, for instance, had her in soft blue satin with tousled earth-mother hair. If that signified her rejuvenated, calmer, older and wiser comeback and ’Music’s saucy good-time cowgirl meant a knowing playfulness was in store for us within, what are we to make of ’American Life’s stern, stark image of her staring out impassively, fixing us with a dead-eye stare?

Sonically the album is probably the most extreme thing she’s ever done but her lyrics also show signs of shiftlessness regarding her position. Though there’s little here that she hasn’t tackled many times before - [losing her] religion, loss, self-determination, the vagaries of fame etc - but it seems that though she made it through the wilderness (somehow she made it through) to ‘Ray Of Light‘s maturity and self-acceptance, it seems that things have soured somewhat.

Madonna's new songs hint at a gathering storm of restless ennui or frustration; an angry urgency that motherhood or wifehood hasn’t managed to quell like she thought it would. The source for this drive lies in the song ‘Mother and Father’

In an album of highlights this is the highlight. Madonna has written about the death of her mother before, most notably and beautifully, on ‘Promise To Try’ and ‘Mer Girl’. But she has never been as straight forward and unblinkingly direct as here, remembering her death with, as you do, a bitter clarity “I cried and cried and cried all day / until the neighbours went away / they couldn’t take my loneliness / I couldn’t take their phoniness”. Madonna is phenomenal here, giving, in brief, almost elliptical sentences a recognisable portrait of a working class family shellshocked by grief into a numbed silence and the effect of bereavement on a child in their formative years, namely with the anger [mis]directed towards the remaining parent (her father), “I didn’t know his heart was broken / not another word was spoken”. Then, most revealingly, is: “I made a vow that I would never need another person ever / I turned my heart into a cage / a victim of a kind of rage”. Like fellow Detroitonian Eminem, it's this kind of deep-seated hurt that has fuelled her furnace, and the steely self-determination that was forged from it made her a force to be reckoned with. But will she finally let the scars heal?

Poor Mirwais, though, can’t keep up with Madonna, out ran by her quicksilver pop resilience he‘s like a squeezed lemon by the end. The final track sees him end the album on a right old damp squib, clumsily making up any old noise, out of ideas. Madonna’s already gone, however. 20 years on she remains an iconoclast and an enigma; always just out of reach, always untouchable, always moving, always ahead.