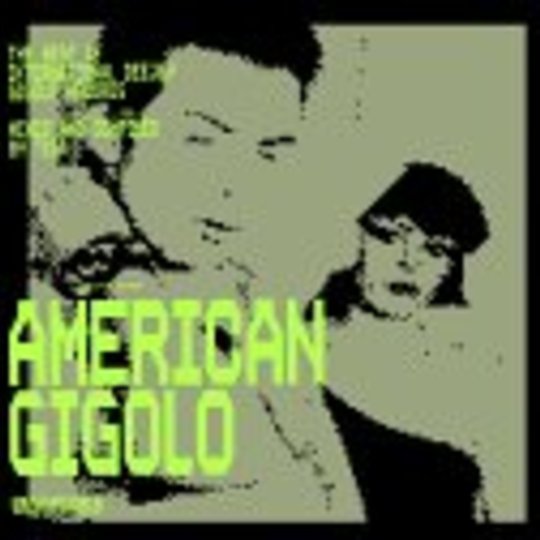 Night time in the city. The streets are crawling with people looking for a good time, looking to escape their lives. People just like you.

The underworld are out tonite. Let’s get the party started. Your hands slide on her hips, her skin tastes of salt, her hair smells of smoke, you can taste Absolut Citron in her mouth. Another drink? And another and another? I won’t say no.

‘American Gigolo‘ is, in case you ain’t guessed, Electrik-teckno-disko-sexx-musick. It’s fevered electro to fuck to, music. It’s the soundtrack for the decadent and sleazy NY underworld. It’s cold and Teutonic retro-dance with a knowing wink. It’s a compilation of Berlin’s Deejay Gigolo dance label which features the uber-cool likes of Miss Kitten & The Hacker, Fischerspooner, Vitalic, David Carretta and others you’ve not heard of. It’s all of the above.

This is a blurry snapshot of where the it_ - y’know? IT**! - is right about now: Robo-humpin‘, piston-pumpin’, 80s man machines gone to the future disco. It puts the ‘synth’ back into ‘synthetic’. “Hey, dance like a machine_“ commands someone on ‘You Prefer Cocaine**‘, conjuring up images of early 80s, unsmiling daft sods in buttoned up shirts and too much make-up, stiffly jerking about pretending to be androids or something.

But while this comp does ride - or drive - on the supposed 80s revival, I can assure you it isn’t some new romantic prat-about, this is polished chrome and sleek mechaniks; dark, rainy streets reflecting neon; shiny PVC and go-go bars; tears falling onto the dancefloor.

You down the White Russian and, taking her hand, you leave the suffocating, subterranean, airless pit and burst out onto the street once more. The music still sounding, pounding in your head, your shirt sticking to your body, you have electricity crackling in your veins. The night streets are alive with people and light and movement and sound. And, for once, instead of being oppressed and depressed and lonely and empty you feel alive and are suddenly filled with the determination to end the night by licking champagne from the hollow of the girls back and snort caviar from the inside of her thigh while Dopplerffekt’s ‘Porno Actress’ thumps away in the background.

You’re still not convinced that this isn’t all part of one of those camp/ironic (what’s the difference?) theme party mix albums for office scum in fucking Daventry or somewhere to dress up in fancy dress and dance to at a works do, are you? Well fuck you then. And fuck Zoe Ball and fuck TOTP2’s Steve Wright and all his “heh heh, check out the guy at the back with the moustache. What does he look like? The muppet” sneering - stop laughing Steve, that’s YOU up there, don’t you remember? You twat - and fuck all the future-hating, nostalgia wallowing media and music scene. This is music for tomorrow and tomorrow and tomorrow. And tonight and all the heavy promises it is laden with, ready to make or break them.

Okay then, the 25 tracks on ‘American Gigolo‘ have been mixed and compiled by “Gigolo wonderboy” DJ Tiga. Highlights include. Linda Lamb‘s ‘Hot Room‘, DMX Krew‘s ‘Cold Heart‘ and Tiga‘s very own ‘Sunglasses at Night‘ (“I wear my sunglasses at night / so I can keep track of visions in my eyes“). Then there’s Fischerspooner‘s ‘Emerge’, already a mighty, leather-booted classic, it is a silver, slivery, turbo-charged, hard and wet, hair-pulling sex anthem with MASSIVE fock-off beats and a tune that could stun an Atari Teenage Riot fan at 60 paces. It sounds like what might be produced by a whiskey drinking God hitting out the tune to Squarepusher‘s ‘Red Hot Car‘ onto planets which is then remixed by a masturbating, lust crazed Satan. But better.

Also here is Miss Kitten & The Hacker‘s ‘Frank Sinatra‘, which, of course, you already own. What? You don’t?! Oh, give over, how can you resist lyrics as deliciously, darkly decadent as: “_Every night with my star friends / we eat caviar and drink chomp-anya / In limousines we have sex with my famous friends / suck my dick / so nice_“ delivered with such poisonous panache by Miss Kitten, it represents all that is wonderfully, hilariously ebullient and exuberant and carnal about ‘American Gigolo’.

You sprawl over the seat in the back of the taxi, head swimming, heart singing. You zoom off into the night. You’re on your own. Where did she go? Swallowed up by the dark, lost in the crowd, stolen away... something. Who knows. That sharp, familiar ache twinges again.

Go home and sleep it off. There’s always tomorrow night.