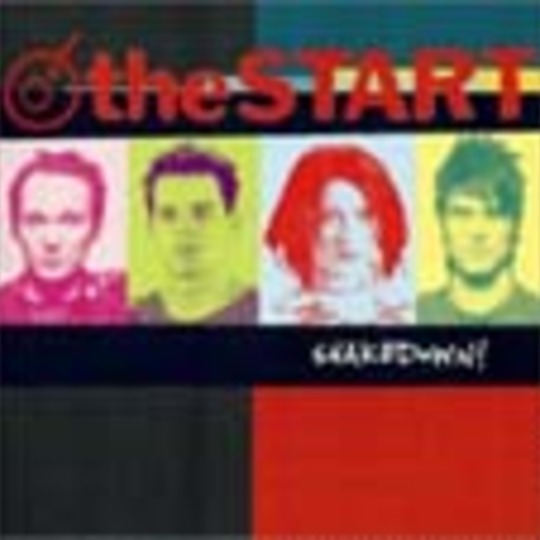 “Rise up! Dance to a different theme/ Rise up! Free your mind of what they say/Rise Up! Shakedown!” – ‘Shakedown!’

This is The Start and indeed the start of a new era for Aimee Echo, who’s risen up from the ashes of Human Waste Project with a sound so brave, so unpredictable & so exciting it takes the credulous step of playing the repeat button to fully understand where Aimee’s at. Gone is the hard-hitting abrasiveness of ‘E-Lux’ and in comes a band, including former HWP drummer Scott Ellis & ex-Snot member Jamie Miller, who seem to have developed an insatiable appetite for Duran Duran and 80s synth-pop. Aimee herself has returned with new image, adopting the persona of a young Madonna with the vocal delivery of Kate Bush, while still retaining that inimitable wide-eyed voice that can turn a man on at 20 paces.

But it’s only when you fully immerse yourself in the explosive, super-tuneful synth-pop formula of ‘Shakedown!’ that you realise just how addictive it is. This is an album drenched in bouncy, sugar-coated melodies that envelop you in a wash of catchy choruses and guitar-pop anthems that’ll dance around your head all day, all night and in the shower the next morning.

Title track ‘Shakedown!’ explodes into an infectiously dark pop-rock fusion of keyboard bleeps, silvery vocals and a pop-rock smash that sees you jiving uncontrollably around the room. Then it’s on to ‘Gorgeous’, which sees Aimee’s untameable schoolgirl demeanour unleash her new-found Madonna-isms perfectly well in a contagious melody-ridden track that requires full volume by the time that huge chorus kicks in!

The Start are a breath of fresh air & their unique mix of 80s electronica and digital-rock soundscaping will ensure that ‘Shakedown!’ will act as a blueprint for a groundbreaking new revolution in rock music. Welcome to your favourite new band!