Land of the Free? 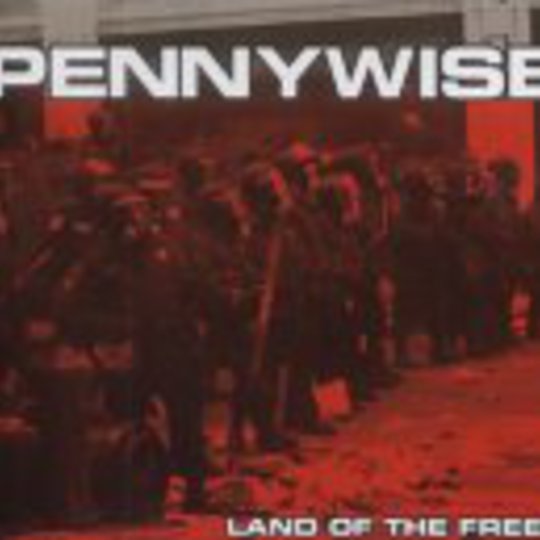 ”This album is meant to be a soundtrack for political activists all over the world”_ – Jim Lindberg, Pennywise**.

This is PW album number seven. This is passionate anti-establishmentarianism pumped out with soon-to-be reclaimed street cool. This is cynicism mixed with a sense of panic and fear, pulling at your soul to make you want to revolt. This is punk rock, today, for a better tomorrow! ...style’n’grace come as standard.

’The Land Of The Free?’ for any other band would be a brave rhetorical question to title a record. The Answer is within the empowering promises and a convoy of threats. This album torpedoes off on the plateau where ’Straight Ahead’ landed. If you did not sit any of the previous classes, you'll not know about the skate vid’ guitar thrashing, the soul bouncing bass and the drumming which hits you like your head’s inside a tin bucket with 20kung-fu warriors beating your bonce!

Class is now in session, forget about this sub-standard ‘cool’ that you know, it is all wrong, listen up…. The camouflage of baggy trousered 90’s, diluted Ramones spunk, is torn away and burnt with every failed peace-treaty of the last century, this happens as the lyricism of Jim Lindberg wages war on the heard-it-all-before punk of today. His words turn this into the surround sound, 4-D, system crushing, REAL PUNK that post-modern, upwardly mobile kidz need. This reality isn’t giggling about being a chauvinist or shouting shit-fuck-cunt-mutha-bitch whilst with no objection, beating up police, smashing niké town to the ground and turning a protest into a media-manipulated, issueless, Tv-friendly, "riot". This is what lacerates Pennywise apart from the debased Mtv-plop and sped-up pub rock.

I hold Pennywise as an inspiration for giving me the self-belief in beginning to set up this independent media organisation. Why? Because this is the kind of band you can not just listen to but believe in and feel you have a part to execute in this movement. A movement for a more just world to live in. There is almost nothing left but ourselves to believe in, inside a world of conspiracy and monstrous ideologies, creating profitable existences with little ethical considerations to the affect that may have.

’My God’ is the perfect example of what the ‘wise are all about. The verses are punching holes into the bureaucracy imposed upon the modern day disciples who agree to whatever their religion says (brainwashing??). These people who believe in what justifies their position and power, then shifting their belief system to suit themself. The chorus’ are ejections of deviance and self-belief, where the only sins are those you can not control, yet! With this view and the trend that the biggest modern day religion seems to be capitalism, maybe agnosticism and protest is our only response?

I could pick any track and evaluate it but that would defeat the purpose of a record such as this, that must be applied to your own context and to back up screams of “SET ME FREE! SEEETT MEEEE FREEEEEEE!” like a convict, after 19 years of incarceration for crimes that do not exist. I could of quite simply stepped back and compared this record to a child who can’t work a record player spinning a Specials Lp with its middle finger as fast as it possibly can be span. I could of called this record a new version of the Clash on crack, and mumble on about how you’ve heard it all before. You might be old and maybe wise enough to be suffering deja vú, but does that save the apathetic Generation X-ers in a world with questions rather than answers?

“…the world is a smoking gun and it’s loaded, soon it’s goin’ to blow you away, but for now nobody has noticed, but for we’re goin’ to have our day!” This record is propaganda! You’ve been warned, be sure to patent and gold plate your battleplans Mr.Mcbig-cheese.