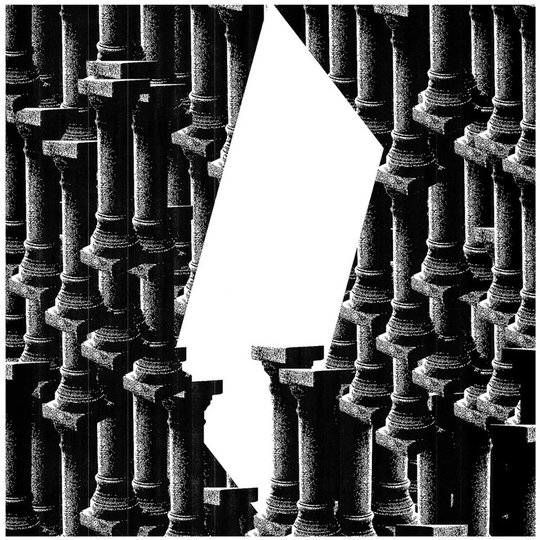 Since 2012’s Six Heretic Anthems for the Deaf EP, Brazilian trio DeafKids have imaginatively explored the possibilities of discordant noise. While they hinted at the breadth of experimentation they were capable of on 2017’s Configuração do Lamento, their latest takes their sound further and into more curious territory than they’ve previously ventured.

Working within the realms of D-Beat, metal, noise, hardcore, and punk, Deaf Kids’ Metaprogramação pushes this heady mix towards deep-psych levels. ‘Vox Dei’ begins the record with a noise that sounds like the mouth of hell being conjured open by deep monkish chants. Yet, the title is from Latin, meaning ‘the voice of the people is the voice of God’, and suggests DeafKids’ subversion extends beyond sonic flux to the themes at the heart of the record.

The noise horror expands to insect-like electronic twitches before seamlessly morphing into the babbling polyrhythms and robotic vocal clamour of ‘Alucinações de Comando’. From the outset, Metaprogramação promises to be a formidable experience, which the rest of the record goes to great lengths to fulfil.

At times, as on ‘Templo do Caos’, the album recalls the psych rumblings of Terminal Cheesecake, but with a more savage and angular attack. The lurching guitar riffs of ‘Mente Bicameral’ disrupt already chaotic rhythms and dizzying vocal delay and it feels like five songs in one, yet miraculously manages to not just equal, but transcend the sum of its parts.

Which could also go for the album as a whole. Rarely can a band tether this many genre-specific tropes to a coherent centre, but DeafKids are deft mixologists. Flitting between mad little 40-second-interludes and seven-minute-plus epics Metaprogramação accomplishes a strange symbiosis amid disparity and tension.

Metaprogramação is by no means a light work, and more often than not DeafKids evoke dark overtones. But there’s also a tangible sense of delight in the extremes they go to, as on ‘Vírus da Imagem do Ser’ where they appear to revel in the ruthless pitch of their playing and the reach of their experimentation.

Metaprogramação is a genuinely exciting record, and ‘Raíz Negativa (Não-Vontade)’ is an animated example of the fire they can engineer. The techno pulses are an unyielding foundation from which the band explore a multitude of instrumental, vocal and electronic avenues. The relative peace of quieter moments is swiftly shattered by a barrage of percussion and ramped up guitars, which is indicative of how unpredictable the record is as a whole.

That unpredictability lies at the heart of the album, as Metaprogramação encourages the listener to question what they hear, to distrust their instincts, and to reassess their expectations. DeafKids fearlessly walk uneven ground with little regard for what tools they use to aid their passage. Whether they’re tapping into metal, hardcore or experimental noise it’s all in service of stimulating and awakening dormant senses. You’ll be hard pushed to find a more enlivening listen.

On Time Out of Time