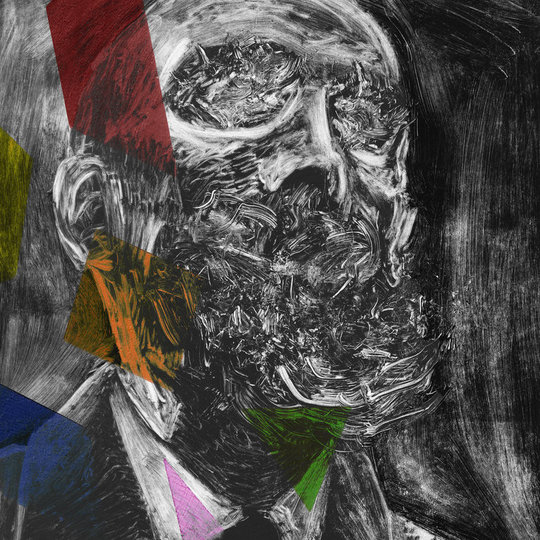 Sometimes a band is greater than the sum of its parts. Leeds math-rock outfit Irk are Jack Gordon on vocals, Ed Snell on bass and Matt Deamer on drums, but the brutal and abrasive music they craft feels like there were many more hands at the pump. But this is the beauty of Irk. Since they emerged in 2014 with their gloriously abrasive debut EP Bread and Honey they felt like a breath of fresh air. This was followed with a split EP with doom quartet Wren. Their sound have evolved but still retained that initial blast of visceral power that makes audiences, live and at home, take notice. Then, as usually happens, they went quiet. Some feared their demise, but earlier this year they started releasing new material. These new songs were culled from Irk’s debut album Recipes from the Bible, which is 40 minutes of math/shronk excellence.

Gordon has explained that the album ‘is about the awful world we live in. It is about the sexy and exciting new ways in which intersectionally marginalised people are tricked into apathy by muscular haircuts with a phobia of context. It’s all at once angry, absurd, frustrated, disordered, violent, idealistic and unreasonable. Just like the Bible.’ Effectively Irk are holding a mirror to society. Sometimes it’s a bathroom mirror all misty and fogged up; you can make out shapes, but nothing definite. Other times it’s a carnival mirror and everything is warped and skewed, but then they show a normal mirror, with bright stark lights reflecting into it, and you’re forced to see the ugly nature of 2018.

The first thing you notice about Recipes from the Bible is the lack of guitars. In the world of math-rock guitars are king, and to totally ignore them is a brave move. Then it hits you that Irk don’t need searing solos to get their point across. Snell’s vitriolic bass more than makes up for a guitarist. Re-listening to record after this revolution is a glorious experience, realising that Recipes from the Bible’ and Irk have more in common with jazz, with its ad-hoc time signatures and experimental sonic soundscapes. Irk are tighter and free to experiment more than if they were tied to the conventions of ‘rock’. And this feels like the point of Irk: not to play it safe or follow the pack, but to head off on their own and forge their own path.

The standout tracks on Recipes from the Bible are when the band just left rip. ‘The Healer’, ‘Insect Worship’ and ‘You’re My Germ’ are examples of this. Musically they’re ripped, visceral monsters that just hit you full in the face and don’t let up until their ungainly ends. The latter features wonky saxophones curiosity of The Physics House Band's Miles Spilsbury. This inclusion really adds something to the music and takes it to another level or abrasive delight.

The star of the show is the lyrics. Yes the music bludgeons you about the senses, but it’s the words that really hit home and really twist the knife to make you squirm. There in amongst the layers of absurdity: “Countermeasure. Counteragent. Counteractant. Cowboy in love”, “They could smell your jealous knuckles rapping at the back door. Forcing entry but to find you forgot what you came for”, “It could not have happened to a nicer person. I am sorry for that.” And there are lightning bolts of clarity: “People care about you then they don't. They want to be around you then they don’t”, “And that’s all she wrote, old buddy, old pal. As simple as that, no twist ending, or even any real sense of redemption.”, “Tell them I’m sorry. Tell them there’s something wrong with me. Tell them I love them. Tell them I tried my best.” and “Default human knows no pain but gets all the liniment. Default human, not by gain, but by birth right.”

The album ends with the haunting line “For the sake of your short life, I would probably say don’t bother. I am your brother, you can trust me. There is hope for all of us. I told you I would make you laugh.” And Gordon is right. Recipes from the Bible does make you laugh, cry and squeal with glee, sometimes at the same time.