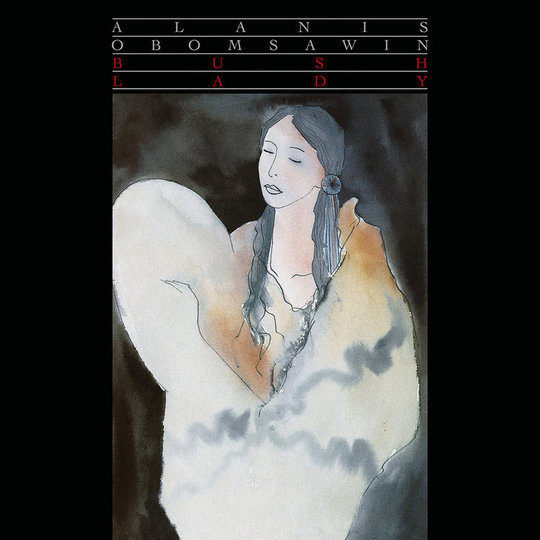 American-Canadian Abenaki artist Alanis Obomsawin is perhaps best known as a highly regarded documentary filmmaker, whose work has largely focused on issues affecting First Nation peoples. In addition to her film career, Obomsawin has also sung since the Sixties, often performing in aid of humanitarian causes, and in 1985 she recorded her first and only album. However, she was dissatisfied with the original recording of Bush Lady, so in 1988 reclaimed the masters and remixed the record, as well as re-recording the title track. The album featured traditional songs of the Native American Abenaki people as well as original compositions for a record that skilfully merged her heritage with an avant-garde approach.

The record has been long out of print, but Canadian post-rock label Constellation have re-issued a remastered version of the album following Obomsawin’s one and only performance of it at Le Guess Who festival last year. To listen to her work is to realise that both the label and the festival had immense foresight in giving people the opportunity to discover, or rediscover, an extraordinary work that is so much more than mere heritage release.

‘Odana’ opens the album with the pastoral flutter of wind instruments, but as the track progresses and the bass notes of cello add a mournful tone that contrasts to the light opening. It’s also the first encounter with Obomsawin’s tremendous voice whose little details, like the subtle vibrato she applies, are bewitching. The production is equally striking, as it offers a warmth and clarity that really forefront her vocal.

‘Bush Lady, Pt. I’ is sparsely layered with instrumentation, with a single drum beat providing the heartbeat of the song, but the arrangement is nonetheless powerful. Much of that power rests on Obomsawin’s voice, her masterly cadence and original approach. The impressionistic vocal, punctuated by her evocations of the bush lady in question, are both mythical and earthy. And it’s perhaps this song that most readily conjures her Abenaki Nation heritage, but she has moulded it into something utterly timeless and unique to her. Without bombast, she dynamically summons cultural divides and displacement, which feel like trying to mix oil with water (“I walk around with the sorrows of my race engraved upon my face”), yet musically she easily marries the traditional with the experimental effortlessly.

Conversely, ’Bush Lady, Pt. II’ is the most melodically poignant moment on the record and is softer and more nurturing in tone: “I know this place where no one cries/I know this place where no one dies.” In addition to highlighting the destructive nature of cultural gulfs, she is also quick to underscore what unites. On ‘Of the Earth and of the Sea’ she begins in English before weaving French into the middle, then singling wordlessly but rhythmically creating a multicultural tableau, and arguing, “we are the children of the earth and sea.”

The a cappella closer ‘Nziwaldam’ is a hugely affecting way to conclude the record with her lone voice left ringing in your ears. It’s remarkable that someone can conjure so much from such a limited palette. With vinyl sales on the rise, in particular, each week sees a glut of re-releases, many of which feel utterly pointless, but this record is an exemplary instance of an essential repressing. As a true rediscovered treasure it sounds as radical as it must have done on its release over 30 years ago. Bush Lady is a thoroughly magical record that is also deeply compassionate and strikingly real.