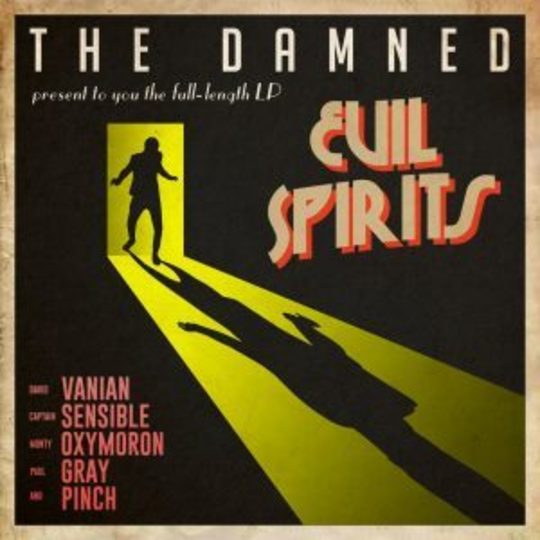 Punk music, at its core, has always been reactionary. Push aside the great hair, veganism and DIY ethics; and at its core punk’s ideology has always been to stand up and kick against societal wrongs. With The Damned’s Evil Spirits then, there’s no need to salt the corners and reach for the sage. These demons have been conjured from the depths of our culture; and The Damned are very much here to cast and call on them, and maybe, just maybe, teach young punk-witches how to fight for what they believe in.

One has to wonder then, as this is the band’s first release in a decade – why now? What forced these kings of goth-punk out of retirement and back into the recording studio? Was it boredom? Politics? Artistic survival? The answer, we inevitably find, endures in this album. In a world where the political pressure cooker rises daily; there’s never been a better time to shout about what’s wrong with the world.

So this is the theme of Evil Spirits in abundance. We’re hit with this message in the first three tracks. The opener, ‘Standing on the Edge of Tomorrow’ lures us in with the lyrics “This time/could be the last time/maybe the only time to get it right” and passes on the band’s message of Change! Now! RIGHT NOW! Swipes at Trump sit in the next two tracks, which obtusely (if accurately) slam the man and his politics. Through the rest of the album, music races forward with catchy keyboard and guitar riffs that’ll have you caught in a folk-bounce shuffle-round-the-kitchen-in-your-work-clothes-bop. In places the bubble-gum riffs and vocal layers could be mistaken for a musical sunrise, a call to arms of kindred spirits, a synthesis of a theme-song for an internet generation – until this sugar is undercut by darkness through subversive lyrics “We trust our masters to watch on us night and day/Don’t we?? Don’t we???”.

Aside from the politics then, sits track eight. ‘Procrastination’, a track to play in goth clubs (especially if you have something better to do) is a glimpse into the past of punk rockers, an anthem to the dispossessed and almost hits ‘Eloise’ heights. Almost. The context of the rest this new release however, abounds. Expectation with Evil Spirits lies firmly in the band’s heritage; we expect a punk band, who convey a punk message, with politicised punk lyrics to deliver a punk sound reminiscent of the band’s anthem ‘Smash It Up’; and Evil Spirits doesn’t quite get there.

It’s a slick record, magic of course, falls in part from the fingers of none other than the infamous Tony Visconti; and it’s got some beautiful anthems that catch in your ears with mantras you’ll find unshakeable (“When everybody’s looking left, what the hell is happening right?” and “...and you build your walls, an empire falls”). But punk, it ain’t. As a consequence, an audience au fey with the “in yer face” shock of ‘New Rose’ and ‘Smash it Up’ might find themselves stuck in a struggle to engage with this newest release. Gone are the discordant, hairy harmonies. Gone are the deadly distorted guitars. Gone is the temptation to hit the drums as hard and fast as possible. Do these reductions make it a butchered record? No. Does it sound like a classic from The Damned? Absolutely not. If you’re looking for a new Damned, Damned, Damned – go elsewhere. It’s not even a logical progression from the Eighties vibes of So, Who’s Paranoid?. With Evil Spirits, you have to halt, to concentrate entirely to absorb the main message. Close your eyes; and it’s a politically charged electro-pop-rock love-spell to our tumultuous political times – but without the band’s names on the front, you wouldn’t even begin to place which dimension this demon came from.

Which leaves us with a question. Is sanitation the fate of all new releases from the gods of Seventies(ish) political punk? Have the past generation of counter-culture punks, angry at the world finally settled down, had kids, and mellowed? Maybe musically; but Evil Spirits shows – if you’ve got the will as a listener to scratch the surface; there’s still plenty to be mutually pissed-off about.