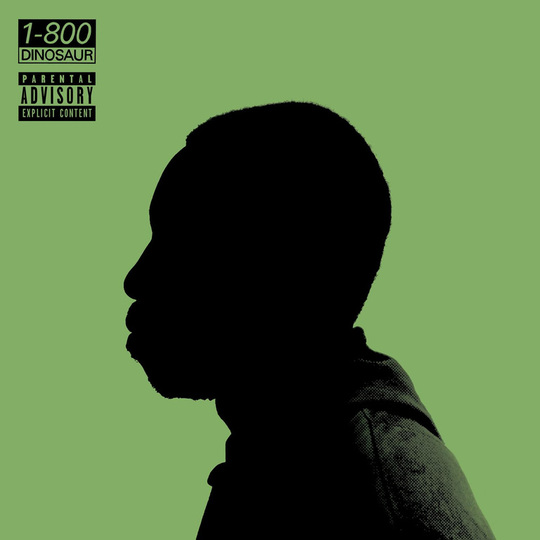 The musical polymath that is James Blake first started 1-800 Dinosaur in 2010 as club night banner while on tour. It was a way for him, and his backing band, to let off steam and play different music than that he's know for. 1-800 Dinosaur now consists of Blake, Foat, Trim, drummer Mr Assister, guitarist Airhead, and DJ Klaus and they’ve just released their debut album 1-800 Dinosaur Presents Trim.

Instead of opening with a salvo of the rapid fire beats, bowling loosening bass and the sound of the inner city sprawl that is Trim’s inspiration, we’re greeted with world music xylophones and shimmering synths. While the music whips and swirls around us, Trim delivers stream of consciousness lyrics are as intelligent as they are entertaining. 1-800 Dinosaur is an alternative to over produced, gangster cliche hip-hop. ‘Before I Lied’, picks things up a bit, for the first time on the album we have conventional bass and breakbeats. Sounding like a slower and laid back re-work of DMX’s classic ‘X Gonna Give it You’ with an inspired horn section. Trim’s grime raps are as clever and inventive as on ‘Stretch’, but the beats are tighter and everything has a grittier feeling to it.

‘Man Like Me’, is classic grime in the Wiley Bow E3 vein, but musically it's more ad-hoc and shambolic. There are moments when it feels like everything is going to collapse under its loping bass and ungainly beats. ‘White Room’ is tailor made for when you walk into a club, it’s busy, everything is strobing and it looks like the small room is in a different time zone to the rest of the world and everything is in slow motion. However the star of the show is Airhead’s searing guitar riffs. They give the song a feeling of euphoria that when juxtaposed with the stark electronics gives it a warmth seldom seen and hear in electronic music. ‘Seeker’ sounds like a cut-and-paste remix of music and dialogue from the Channel 4 drama Utopia. It’s all choppy beats, lurid, creepy, but ultimately one of the stand out moments of the album. Speaking of standout moments, the best is definitely left for last. However the reason why ‘No Manners’ is so addictive to listen to is partly down to a delicious string sounding loop and it has a catchy as chorus. “The kids got tunes, bangers, And I’m out with the hoodlums, goons, jackers. And they throw us in the works, spanners, And we ain’t like those other grime MC’s, rappers. You might end up with you your whole crew in tatters, you’re whole crew’s in tatters”.

1-800-Dinosaur Presents: Trim, is far more than a Blake side project. It’s a fully functioning collective that, luckily for us punters, have put on some amazing nights and released some forward thinking music. The real power of this album is not only the showcasing 1-800’s collective musical prowess and their ability to mix and merge genres and style effortlessly to create music that sounds like nothing that has been released commercially in recent month, but of Trim’s vocals. Throughout the album he is the glue that holds everything together. Some of his lyrics are just roasting and bravado, but others are tongue I cheek rhymes meant to evoke a sense of fun, but there is also a lot of poignant and thought provoking stuff that not only sums up what’s it like to be living in 2016, but hints at a way to try and make it better. 1-800-Dinosaur are much more than a club-night, a label and a supergroup and where they go from here it’s hard to say, but it’ll be well trim!

The King of Whys