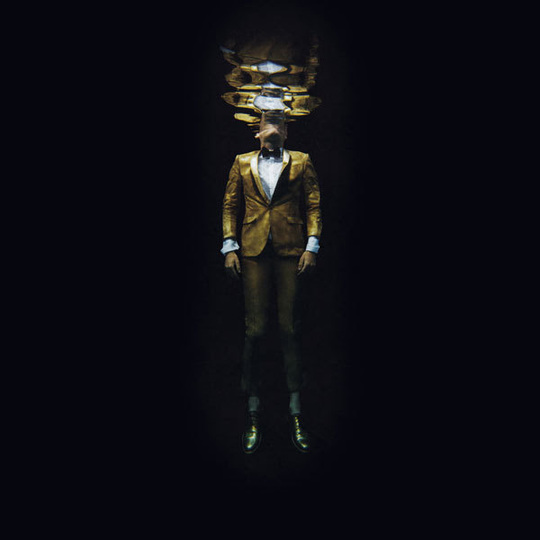 The first time I saw Jherek Bischoff perform was in a dark, dingy Birmingham venue around three years ago, when he played with Amanda Palmer and The Grand Theft Orchestra. He was the tall, gaunt, quirky, make-up-wearing bass player, jumping up and down to a cabaret cover of ‘Smells Like Teen Spirit’ amidst a chaos of glitter, instruments and sweat. So when his latest album Cistern turned out to be this incredibly spirited passion project consisting of hair-raising, studiously arranged string sections, and epically haunting build-ups nothing short of whale song - I was surprised, to say the least.

Now, I’m no expert on ambient music. But I usually unconsciously split it into two camps. The first one is robotic, soul-destroying mind-drudgery that they most likely play as background music in psychiatric facilities alongside Mozart; but the second one is this all-healing, uplifting, nourishing aural experience in the likes of Eno’s Music for Airports. And, as it turned out, the crazy suit-sporting, bass-playing, frolicking Bischoff just happened to roll out a fine specimen of the latter.

If I told you to put Bauhaus, Cocteau Twins, Philip Glass and Twin Peaks together and throw a bit of Arabic traditional music into the mix - it would only give you a pitifully bland taste of what this album’s juices are truly all about. It is a journey. A journey deep into self-examination, contemplation of space and time; a tale of crisis, suffering and salvation.

Bischoff, ever the talented arranger, creates music patterns of incredible beauty and meticulousness. First of all, there’s the strings. Oh, the strings. There cannot be a better musical metaphor for human suffering and mental turmoil than the strings. They are abundant on this album and tie in beautifully with the occasional military march-like drums or the gorgeously lonesome slide guitar. It’s a lofty and ambitious work that doesn’t ring a single fake note.

In fact, it’s the kind of music that hits all the genuine, visceral notes. It is one of those records that will (hopefully) help you put your life into perspective by reminding you of the teeny tiny role you play in this universe. You know, like a massive cistern stranded deep underwater - a tiny drop in the endless, dark recesses of the ocean, but still there, pushing on, existing, despite its lack of importance in the overall scheme of things.

The album goes through very strongly defined stages that mirror the stages of human life: doubt, depression, anxiety, loneliness and uncertainty which, every now and then, get diluted with a drop of curiosity and hope. Yet just as the positive tones start to overtake and gain momentum, Bischoff cuts them off when they are about to reach their climax.

Just listen to ‘Headless’, with its wistful, longing guitar and string passages seamlessly moving from despair to hopefulness, peaking with an absolutely epic, mind-blowing piano-driven ending that makes you feel like anything in this world is possible. And just as you’re expecting it to go into a full-blown Ode To Joy-style ecstatic explosion, the song suddenly stops and that’s the end of that. Comparing it to the precarious nature of human life would be unsubtle, but that’s exactly what these short, abrupt endings made me think of.

Jherek Bischoff does not mess around. It’s amazing to see an artist make such pure, uncompromising music. I cannot wait for his future ventures - as long as he keeps scraping the deeply personal pools of his creative mind, I am sure he will come up with a wealth of equally wonderful, awe-inspiring music. Who needs therapy with musicians like this in the world?

Oddments of the Gamble