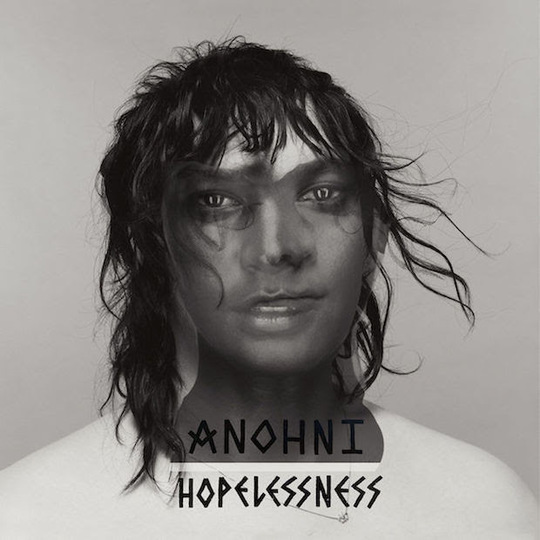 Never before has relentless brutality sounded so beautiful. Anohni, once known as Antony Hegarty, has shed her Antony and the Johnsons persona, just as she has finally publically shed the gender she never felt part of. In many respects this is a new artist, with skin raw and red from scraping out of her cocoon, albeit maintaining that bitter-sweet purr in her voice, which always felt like despair wrapped in velvet. Hopelessness is the sound of a writer letting go of their past, striding past our expectations and punching us in the soul. It is less a record and more an emotional defibrillator, delivering shocks straight to the heart: It could jolt us to life, but could just as easily short-circuit our bodies and stop us dead. It feels that powerful.

That may sound dramatic, but then Hopelessness is an extremely dramatic record. It’s an album tooled entirely to provoke a reaction. From the very first song Anohni is shoving a very twenty-first-century horror story into our faces: our own culture. This is the story of a world we have created together: killing, dismemberment, planet-death, butchered animals, state control, the warped power of the west, untempered masculinity and the arrogance of civilisation. The themes are bolted to the top of the record. ‘Drone Bomb Me’, sang from the point of view of a little girl whose family have been slaughtered by American bombs, invites death in extremely graphic terms. This isn’t Morrissey idly pondering “come nuclear bomb”, this is visceral. ‘4 Degrees’ is one of the most direct songs about climate change written by a major artist in years, almost a charge sheet of eco-atrocity. There’s state surveillance on ‘Watch Me’, the death penalty on ‘Execution’, the failure of America to right its wrongs on ‘Obama’, a rejection of masculinity on ‘Violent Men’ - you’ll notice there’s little subtlety in the song titles, punches are never pulled, truth never shied away from.

The blunt macro-perspective of the words is contrasted by Hudson Mohawke and Oneohtrix Point’s uncompromising, warped, but always gorgeous electronic beds. Moving far-away from the muted, minor-key cabaret of Antony and the Johnsons, Hopelessness revels in clatters and buzzes, part Kanye West, part the haunting gothic of Hans Zimmer’s Interstellar score. It allows Anohni’s voice to dip and rise through shades of melancholia without ever exhausting us in misery. Despite the brutality of its themes, Hopelessness is an extraordinarily beautiful record, musically as interesting as it is lyrically emotive. The way ‘Watch Me’ sits on watercolour synths and space-opera organ is completely gorgeous, while ‘Crisis’ climbs and builds from a hammered heartbeat and swells like a sunrise, despite the “mass graves” and destruction weaved by the vocals.

Though musically poles apart, there’s a comparison to be made with Manic Street Preachers’ twisted 1994 masterpiece The Holy Bible, that too was an exercise in unmasking inhumanity, that too swam in grotesque, damaging images, and like that record it’s hard not to assume some of the themes aren’t aimed as much inward as outward. Though clearly rigid with anger, you worry there’s some self-disgust here too. While inhabiting different characters and voices, Anohni always sings in the first person, and nearly every track invites misery on its author. She wants her head torn off in an explosion, her “crystal guts” spread across the floor, she wants the world to boil, she wants to be injected with chemotherapy, she wants to “become a virus”. Over and over she beckons the horrors of the world upon herself, trying perhaps to die for her sins, or ours. It’s uncomfortable, and that’s as it should be. Purification through pain? Or just a need to self-destruct as an early escape, before the planet boils away? This is, after all, a work titled “Hopelessness”.

Already one of the stand-out records of the year, Hopelessness is Anohni’s first real landmark album since 2005’s Mercury-Winning I’m A Bird Now, and justifies every ounce of praise she has received since that moment: an extremely compelling, beautifully articulated, bonafide masterpiece.