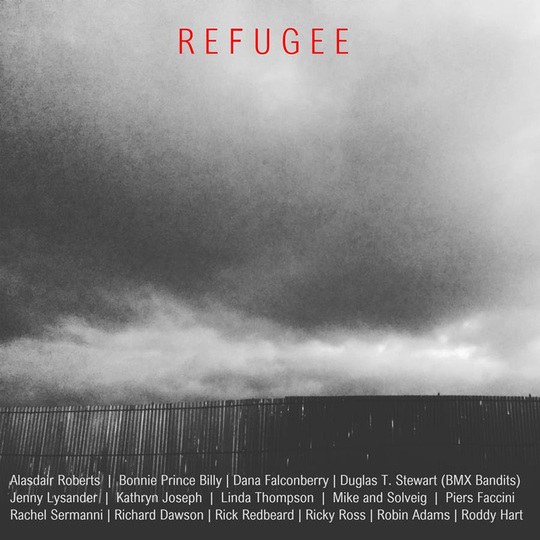 It's difficult to find a figure for the number of refugees who have drowned crossing the Mediterranean, Aegean and Andaman seas in the hope of finding a safe haven in Europe over the last few years. Certainly they number thousands, and just as certainly the number will rise as the crisis continues without prospect of an end.

Glaswegian folkster Robin Adams had growing concerns over both the shocking scale of the humanitarian crisis in Syria and the seeming lack of sensitive mainstream media coverage it was receiving back in early 2015. He wrote a song called 'The Devil's War and God's Blue Sea' in which he tracks the migrants' plight through sad and gentle melodies. The aim was to release it to raise money, but as awareness of the tragedy grew, so too did Adams' aspirations.

This July on Brainfog, folk collection Refugee will be released to raise money for MOAS, who run rescue missions to save floundering refugee boats. Of the hard work Adams has been putting in to realise this album, he said:

'The first and foremost priority should be getting these people safely to dry ground and so MOAS was always the obvious choice. Their work has already saved around 12,000 lives in the first two years. All of the money made from this album will go straight to MOAS to aid them in saving more lives...Although the motivation for the record was primarily sparked by the Syrian crisis, there are so many other countries enduring humanitarian crises, so the record is really dedicated to all refugees.'

And it's not just the cause that makes this an important record to buy; it also happens to be a fantastically broad and intriguing selection of music from talented artists across the folky world.

On the one hand there are the warm, lilting folk artists such as Mike and Silveig with their contrary little piece 'Ravioli' and Rachel Sherminni's 'Innocent Journey', a beautiful slice of Scotland so delicate it's like a feather landing on your cheek. At the other end of the spectrum are musicians such as Jenny Lysander, whose ethereal voice is mesmerising in its sombre reverie. She brings with her the cold poeticism of Scandinavia wrapped in a warm dreamlike shroud.

And that's the joy of listening to this album - each contributor selected by Adams whether through a bond of friendship or respect for their style, was asked to to submit anything, written for the cause or simply a newly-finished piece. This has resulted in a rumpled patchwork of melodies, snatched snippets of tunes through to carefully choreographed songs written specifically with the weighty topic to-hand. Compare Alasdair Roberts's home-recorded 'Scarce of Fishing', a stoically calm and deeply traditional folk tune dealing with people losing their homelands to an uncertain future, with Piers Faccini's 'This Morning the Birds'. Both are brilliant songs, but Faccini's experiments with hypnotic and perfectly simple motifs feel a world away from some of the more traditional music that surrounds it. However, the repeated theme of the sea draws itself out though the whole record, a compelling and rhythmic return to theme that allows the listener to be carried between songs, through the bittersweet to the downright maudlin.

There are many standout tracks and surely something to catch the ear of most: whether you're drawn to Dana Falconberry's warm lustrous voice reminiscent of fireflies on warm summer nights, Bonnie 'Prince' Billy's simple yet dark narrative or the lovely Rick Redbeard's hesitant, disjointed but beautiful meandering.

The record closes with Richard Dawson's 'To The Sea'. Typical of Dawson's experimental style this is a bizarre and wonderful track; wind-wracked and chilling, ill-fitting and confused, the voices at odds but always with that out-of-reach hope of landing on a comfortable conclusion. This piece pulls you down to the bottom of the sea and leaves you there looking up to the sky.