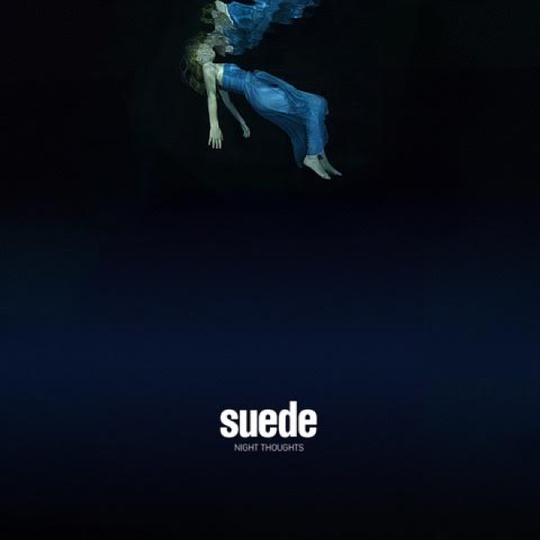 It’s fair to say that for all its flaws, Bloodsports, the first album released by Suede post-reunion, managed to do exactly what it set out to achieve - close enough to the sound that fans had come to expect, yet with enough spark and vigour to pacify doubters who felt they should have been confined to the Nineties. Now that they’ve firmly re-established themselves in our consciousness, album number seven offers Suede the opportunity to go into hitherto unexplored territories, which they assuredly have done with Night Thoughts.

Again produced by regular collaborator Ed Buller, Night Thoughts is not just an album, but also the soundtrack to a film of the same name directed by Roger Sergeant. And right from the opening strings of ‘When You Are Young’, it’s appears that the band are very much shooting Suede through a cinematic filter. ‘I Can’t Give Her What She Wants’ has an almost baroque elegance to it, ‘Tightrope’ continues some of the lyrical themes of Bloodsports with its positioning of love as a dark metaphor before culminating in disembodied voices, as does whilst the orchestrally integrated ‘The Fur & The Feathers’ is the best closing song that the band have given us since ‘Still Life’.

But this doesn’t mean that the album is filled with slow-burning tracks, as even though they’re well past the days of singing about Bostik and diesel, there’s enough upbeat music on here to satiate the more pop-inclined fans. With its punchy basslines, ‘What I’m Trying To Tell You’ appears to be a very successful attempt at filtering Franz Ferdinand through the eyes of Brett Anderson, whilst ‘No Tomorrow’ has the swagger and insistancy of Suede in their prime, even if it does appear to have nabbed its guitar riff from ‘How Bizarre’ by OMC.

There’s very few songs on this album that can be directly compared to their previous tracks. Unlike Bloodsports, where most songs seemed to be like a combination of two or more songs from their back catalogue, the only song that seems overly indebted to their past is 'Like Kids', a song that appears to crib chord sequences and production from the singles from Coming Up and the outro from ‘We Are the Pigs’. Even more intriguing is ‘Outsiders’, one of the most urgent sounding songs that band have released since ‘Can’t Get Enough’ (it actually sounds like it has been plucked from Anderson's underrated Black Rainbows album).

One of Suede’s underappreciated strengths is that each of their albums can be very easily and distinctly categorised - Suede was glam-rock, Dog Man Star was progressive-rock, Coming Up was pop-rock, Head Music was electro-rock, and A New Morning was forgot-how-to-rock. Whilst Bloodsports wasn’t as easy to categorise, Night Thoughts allows the bank to add another string to their metaphorical bow - soundtrack-rock. The band have taken on an ambitious project, and have pulled it off with much aplomb. Even when at their lowest ebb, Suede have always made music that is worth taking notice of, but with Night Thoughts the band have given us their first essential album in 20 years.