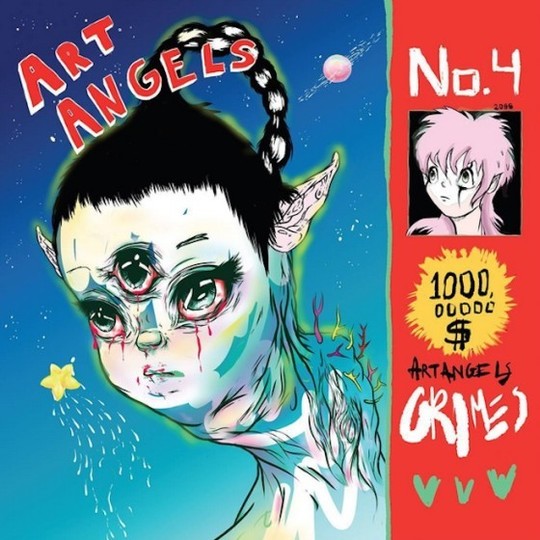 When Grimes threw out an entire record because 'it sucked', nobody would have expected her to go off and write an Everly Brothers song. But that’s what she’s done. ‘California’ – an early highlight on Art Angels’ dazzling string of delights – is all jingle jangle country swing, swirled with fuzzing synths and Claire Boucher’s sweet-and-sour vocals. It’s both a left-turn surprise and everything we were hoping for from Grimes’ next move. And it kicks off a beauty of an album, painted in oily globs of stark colour.

The standalone ‘Go’ was a polarising single. It took Boucher’s neon-light production to its logical extreme, and perhaps a little too far. It went through all the right moves and played all the right drops, but its slight obviousness numbed her idiosyncrasies. On Art Angels, however, Boucher hits the sweet spot – permitting herself to indulge her killer pop instincts, while keeping genuine eccentricity at the heart of every song. Her voice is pliable and far ranging; her arrangements are littered with detail and ideas.

Last year, the idea of ‘Realiti’ being nothing more than a demo she was casting off was unbelievable. It sounded pitch perfect and fully realised. But amazingly, Art Angels fleshes her vision out further – the new version of that track even deeper, rounder and more alive. These songs absolutely throb, melding the blissed out with the fucked up for an hour straight. Still the best producer for her own songs, Boucher has taken another huge sonic leap forward on Art Angels.

It’s interesting that Grimes’ most coherent record is also her most diverse. The first songs in particular are just all over the place – a disorientating statement of intent. From creeping film score, to country sweetness, to screaming industrial noise in the first three tracks alone, Art Angels hangs together on unbelievably addictive hooks and stunning vocal takes. The simple line of “it was too good to be true” of ‘Pin’ brings all of these strengths together in a snapshot moment: a melancholic flourish of vocal; an ecstatic rush of electronics; and a hook begging for the rewind button.

It’s all utterly irresistible. It’s difficult to imagine anybody who would actively dislike this record, being as immediate as the top 40, while packed with dense, detailed surprises, and plenty of visceral snarl. It can sit next to Taylor Swift’s 1989 and Carly Rae Jepsen’s Emotion, as well as this year’s most challenging electronic compositions. And in its ability to appeal to so many listeners, while being as thrilling on its first spin as it is on its fifteenth, Art Angels is likely to emerge from 2015 as one of the most universally adored albums of the year.