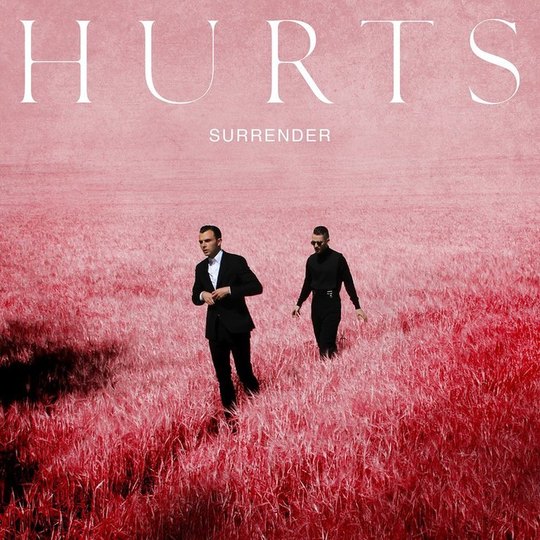 Is there a more ridiculous band on the pop landscape today than Manchester’s Hurts? The massive-in-Europe-you-know electro duo have made a career out of a very basic formula: drama+four-to-the-floor beat that stops and drops into big choruses+hair gel+smart suits and single earrings= selling bucket loads in Italy and a cult following.

On Surrender, their third album, the pair show no signs of fucking with that formula. They aim at big pop drama, at hooks and drops, at fist-in-the-air moments, and head-in-your-hands ballads. It’s a noble aim, and they’ve got there before, especially on their early singles, so it’s a shame that Surrender fails quite spectacularly. Never has such drama been so, so boring. Rarely has such sturm and drang felt so unremarkable.

The real problem is with that formula. Sure it works once - lead single ‘Some Kind Of Heaven; is striking and likeable chamber pop, with a walloping doozy of a chorus. You’d possibly argue it works twice, on ‘Why’ with its Take That-style “whyyyyyyyy” and its none-more-Hurts lyrics (“if this is love then why does it hurt so bad?”) and you could just about push to it working three times, on ‘Nothing WIll Be Bigger Than Us’ with its Euro-trancey thump and high NRG ravey chorus. But Jesus, after that? This is an album with painfully few ideas, way too over reliant on a limited bag of tricks and the hope that the emotive choruses will do the work.

The real shame is that by the time ‘Rolling Stone’ comes around you are so headbangingly bored with the formula, and especially with Theo Hutchcraft's heart-heavy, melodramatic vocal that you don’t notice that it’s head and shoulders the best song on the album, and actually the best justification for that formula in the first place.

Hutchcraft might be the real problem here: he’s good at what he does, but he only does one thing: big and sad and serious. Everything else is built around that, from musical partner Adam Anderson’s beats and button pushing and regular producer Jonas Quant’s gloss, to tweaks and add-ons from helicoptered-in pop machines Stuart Price (The Killers, Madonna) and Ariel Rechtshaide (Haim, Vampire Weekend.) When they start moulding ballads around him and his wretched broken heart things get really preposterous- ‘Wings’ is an Eighties power-ballad disguised as an electrified Gary Barlow cast off, based around the iffy lyrical conceit that our Theo’s girlfriend can fly, leading to such genuinely hilarious couplets as ”There’s a hole in my parachute as big as your heart/ and the gravity’s pulling me down” and ”When I drop like a cannon ball from cloud nine/ promise you won’t let me go”. It’s actively appalling. Even worse is closing track ‘Policewoman’, in which Hutchcraft sees his long-suffering lady as his literal law-enforcing saviour, leading to the laugh-out-loud chorus of ”I hear the sirens coming/ My iron maiden’s running/ to serve and protect my lovin’/ the lights shine red and blue”, which only gets better with the addition of ”I see those vandals running”. Either it’s yet another clumsy conceit to show how Hutchcroft needs his lady love to cradle his fragile heart, or else he’s literally dating a sort of sexy Robocop. Who can also fly.