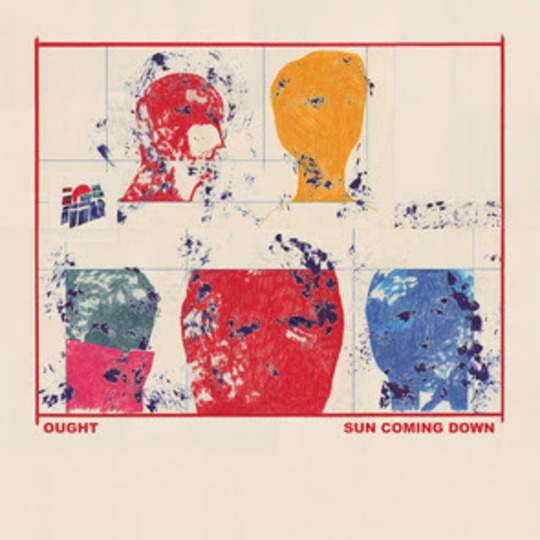 Seemingly exploding out of nowhere in 2013, Ought’s signing to the legendary Constellation Records was a big win for us as much as them. This sort of brazen and (perhaps naively) rebellious brand of post-punk has been in something of a deficit of late, which seems incongruous in this age of such discontent. Comprising four ex-pats (three ‘Mericans, one Aussie), all of whom came to Montreal as ‘economic refugees’ seeking university education for less than the price of a small fleet of cars, they managed to fire out a heftily potent LP and EP within the space of a few months last year, instantly receiving acclaim and touring internationally what Jazz Monroe aptly described in his DiS review of their debut as their ‘righteous kind of party music’. As suggested by its title, Sun Coming Down is indeed a difficult record dealing with quick maturation, and while the sight of the sun setting on the glorious opening chapter in Ought’s tale is a sad one, it’s nonetheless a beautiful thing to witness.

Perhaps unashamedly, Ought have heartily taken on the sounds of their forebears, and the voice of frontman Tim Darcy readily channels the likes of Tom Verlaine, Mark E Smith and even David Byrne, snarling his way through proceedings and mutating his words into swaggering, garbled rabble-rousing, overflowing with hypnotic repetitions and sharp angled sounds bent out of shape. Above all, it’s impossible to ignore just how Fall-esque the band can sound throughout Sun Coming Down - just hear Darcy twist out the key refrain on opening tack ‘Men for Miles’ - but they vitally retain the best aspect of The Fall’s take on rock songwriting: they have no fear of dissonance, and remain wilfully ignorant of traditional song structures and patterns. Towards the tail of the album, ‘On the Line’ sees drummer/violinist Tim Keen scratch out a bowed drone that jars against Matt May’s sweet keyboard arpeggios before they all make a 180 and blast out a fiery tirade of punk noise, the entire time with Darcy sing-speaking at an arm’s length from what your music teacher would call ‘the correct key’. The last two minutes of the very same song turn into a near-groovy coda of hooky lines from Darcy atop fuzzed out keys and beats. This dissociative identity disorder permeates much of the record, hinting at what must have been a densely focused winter in Montreal spent writing, rehearsing and recording away from the Arctic temperatures outside, sewing together soaring choruses with punk blow-outs. The no wave rush of ‘The Combo’ switches from all out chaos to a tom-pounding headrush, ‘Celebration’ inserts several slowing tempo changes and harshly buzzing keyboard notes alongside Darcy’s most schizophrenic vocal performance, and ‘Sun’s Coming Down’ assumes the form of one long and beautiful blow out on a single chord the infinitesimally shapeshifts as the sun disappears over the horizon.

Sun Coming Down is the very worthy child of More Than Any Other Day. Ought’s brand of schizophrenic, paranoid, patchwork songwriting could well make for an uneasy listen, but with every passage of brutal sonic assault they offer a warm bed of AM hooks, balancing every handful of poison with a batch of antidote. There’s a marked step forward in the deceptive depth of Sun Coming Down, and Ought perhaps traded in some of their debut longplayer’s immediacy in getting it, but their wit and emotional complexity remain stronger than ever. As the curtain falls on the final snare beats of uneasy closer ‘Never Better’, the implicit sense of hope and understanding we get from these songs remains into the silence that follows, and the impulse is to head straight back to the start and play the whole thing again.