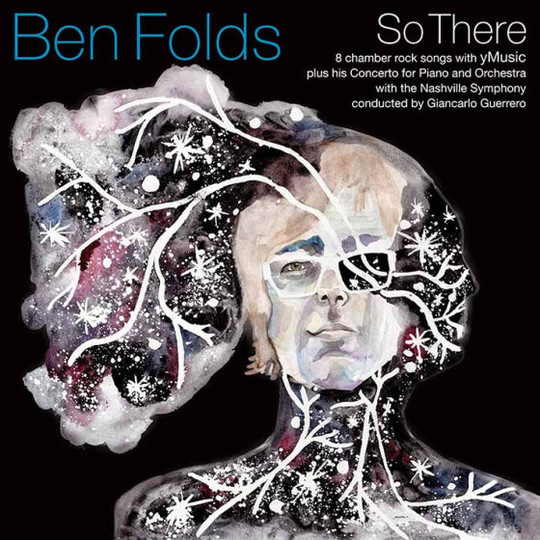 Whatever project Ben Folds is pursuing, he’s always easy on the ear. Even his most acerbic social commentaries carry a touch of oddball magic. And so begins the first track on his latest album So There. ‘Capable of Anything’, one of eight chamber rock songs featuring yMusic, a critically acclaimed New York classical sextet, is bold and fanciful. The tone is set – certainly not the rock we were promised on the sleeve, but the composition blends Folds’ unmistakeable brand of pop with the classical instrumentation perfectly. Neither takes precedence but rather compliments the other until it’s hard to remember why music didn’t always sound like this.

The next seven tracks feel like a stroll down Broadway. There is shouting, clammering, chord and discord (although certainly more of the former) as the voices, both vocal and instrumental take turns at centre stage. It’s an upbeat conversation between some very talented musical voices that at its best combines a self-aware sense of fun that slices through the often maudlin subject matter.

A couple of the tracks, such as the title and ‘Yes Man’ fall too heavily into a conventional pop song rut and don’t make full use of the range of expression that they could. However, this is a rare downturn, with most of this collaboration coming to life in rainbow colours. ‘Phone in a Pool’ stands out, with Folds very much in a starring role. The instruments feel like the chatter of his mates supporting, mocking, making comments on his tale of love and woe. The song is alive with voices even though only one has words. It is like looking into a dinner party, the warmth and bravado underpinned by confession and inevitability.

The final two songs in the ‘first half’ play off each other brilliantly. ‘F10-D-A’ is so playful. This is a brilliant interlude charting three notes – a simple chord broken up. If it was a pudding it would be called deconstructed and would be gulped down by the critics, before ‘I’m Not The Man’ rounds off the collaboration with yMusic. This piece feels mature. It’s confident in its step and a pleasure to listen to. It touches a tender note, not reached before in the album. Each instrument sounds accomplished while mimicking popular riffs, blending genres with self-assured flair.

The ‘second half’ of the album consists of a three-movement concerto. The germination for this creation was a commission from the Nashville Ballet and the Nashville and Minnesota Symphony Orchestra to write an original musical score for a new ballet. The end result is a 21-minute concerto for piano and orchestra. The mood is in many ways a contrast to what came before, but with glimpses of the same intermingled pop, jazz and classical themes. The first half is cinematic in style. The piano has an ethereal quality to it while the strings course comfortable, lulling harmonies, building in familiar-feeling ways. Towards the end of the second movement things begin to pick up, we hear darker tones and further experimentation. This piece works beautifully when it steps away from more traditional classical motifs and it feels like Ben Folds is realising the freedom to be found within a wider orchestra. What doesn’t work so well is missing narrative: what were the dancers doing in Folds’ mind as he crafted this piece? It feels like a powerful scene-set for a dark and conflicting plot, but without being able to see this other side to the creation, it at times falls a little flat.

That said, the final build-up is dark, mysterious and stays true to the fantastic flavour of this ambitious and well-rounded album. It’s not only for those who like classical music – nor is it only for Ben Folds fans. This album has its dancing shoes straddling very different musical camps and somehow manages to bind them together with skill and personality. So there.