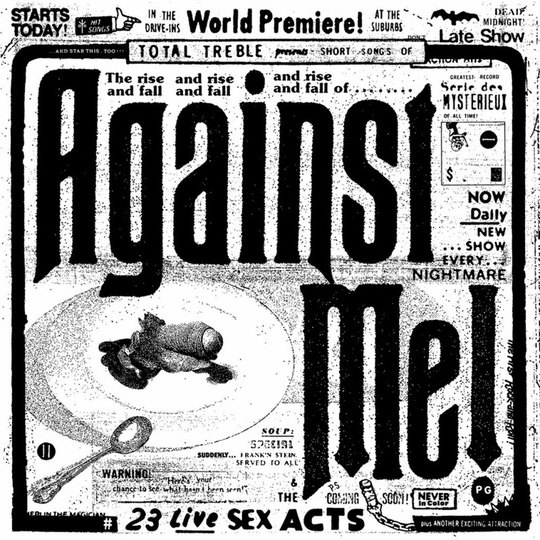 Live records perform a curious function. On the one hand, they’re a band’s glossy advertisement of their best selves, accentuating their strengths as unadorned performers. On the other hand, they can be heard as a faintly vulnerable snapshot of their sound in its purest form, for better or worse, warts and all. It’s like seeing a friend’s a no-filter selfie on Instagram. Sure, it’s natural and exposed, but you know they’re still being extremely deliberate about how they’re presenting themselves.

On 23 Live Sex Acts – Against Me!’s second live album – there is a telling moment in the song ‘New Wave’ which illustrates this duality of live records perfectly. A verse and a chorus in, frontwoman Laura Jane Grace just lets the song collapse around her to yell at a security guard getting rough with an audience member. This goes on for some time, fighting for this kid to stay in the venue. Eventually she admits the song’s a write-off, and they just press on with the next number.

On a record of live cuts handpicked from shows across an entire tour, this might seem an odd take to include. There’s complete authenticity to it of course. This obviously actually happened, and a live record partly exists to celebrate the imperfections of concert. But this is also about presenting the band in a certain way. They want us to understand that, even after decades in the game, Against Me! still truly loves its audience, and that they’ve retained their core DIY ethos in spite of everything that’s happened across their career.

Make no mistake, it’s been an eventful ten years for Against Me! and you can see why they might want to restate themselves with a new live record. For one thing, they’ve since recorded two LPs with Butch Vig on a major label, alienating vast swathes of their devoted fan base, before moving to their own label. Grace has also come out as transgender, speaking candidly about her experiences of dysphoria, and released a genuinely singular concept album on the issue.

Having said that, in spite of these seismic changes, their fundamentals remain the same. Maybe their sound is a little softer, and their songs a little rounder, but their core thrash guitars and lyrical honesty have been a solid constant. As such, a full career retrospective like this hangs together really well – the bouncy and melodic guitar lines of new cuts like ‘FUCKMYLIFE666’ sounding right at home next to old classics like ‘Pints Of Guinness Make You Strong’. And their sound has never been so tight and svelte – drums built like walls; backing harmonies loud, clear and true.

Grace has a vital new confidence too. Fine, her voice is less ragged and urgent than it once was (who could maintain that intensity?) but her vocals control and command the songs more strongly than ever. Songs like ‘True Trans Soul Rebel’ – which explicitly celebrate gender diversity – drip with empowerment, even as they face up to vulnerability. And it’s the moments like this which shine the most across this record – the old songs which touch on her battles with dysphoria proudly reaching out to new audiences, rather than trying to hide in plain sight.

Laura Jane Grace seems to get that a live record is always a calculated performance of a performance. Maybe it’s because she knows better than most that the fundamentals of self – particularly gender – are as much a performance as any punk show. And it’s something to be embraced, not ashamed of. On 23 Live Sex Acts, Grace sounds like she’s more comfortable than she ever has been – in both her band, and in herself. This brash, well curated selection from their last tour is a fantastic appraisal of where Against Me! are in 2015, and they’re in a proud, powerful place. Five or so years ago, it felt like they were shedding relevance. This is the sound of them rediscovering importance.