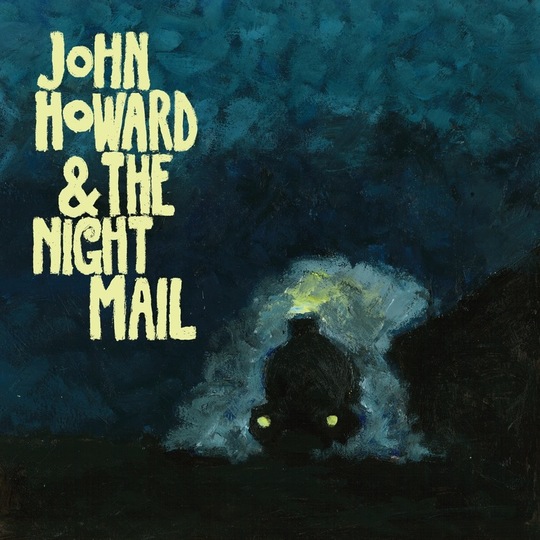 Hi. You don’t know me, and you probably never will, but that’s OK. I’m just one of the dozens of writers that heard your album before the general public, and must now sit down and write some generic review on it. But you spoke to me, Mr. Howard, and now I’ve got to speak to you. Surely you understand. I fell for the first song weeks ago and have been hopelessly grappling with love ever since.

This is normally the point when I segue into your back history, your fun and glammy adventure Kid In A Big World from 1975 that faded into a footnote in the canon of 'classics”. But that would peg you as a has-been, Mr. Howard, and please don’t think I think of you as a has-been. Of course I love your voice, your beautiful feathery voice. The Night Mail shines around you, often as your shimmery velvet backdrop - like on the elegant, Elton John-y 'In the Light of Fires Burning' and its nifty psychedelic swoony finish; or the breathy, Rundgren-y 'Thunder in Vienna'. With Kid in a Big World, you placed your art in the hands of others to mold – here, the band formed around you, and everything sounds more natural, because you sound more assured.

But it’s your words, sir! How you’ve made me ache, and pine, and seethe, and smile, and moan! You excel at the vignette, the day-in-a-life sort of narratives and snapshot profiles that whisk the listener in. In 'London’s After-Work Drinking Culture', the trickling dainty tune (John Cale via Paris 1919, yeah? Please say yes) about an introspective man dragged to a tedious social, you pull the frame-within-a-frame narrative trick swimmingly as the narrator speculates about a co-worker’s humdrum evening routine. And 'Deborah Fletcher' is just Kinks-ingly charming, a suitably perky and verbose ditty about the clever woman with a “diploma in love” – “her students are wallflowers, misfits and shy / and they’ll pay through the nose just to hear her tell them why” (might I add that your diction in this song is just fabulous).

With this fine writing, you show us you, unguarded, complex, sincere, like a dear friend I’ve invited over for tea that I haven’t seen in ages. First there’s 'Before' - and my god. What a drop dead gorgeous, Donovan-y tune, with you sitting alone in the café, arranging old photos, “faded into before”? That’s where you had me, where you roar into the climax, and list everything missing in this life – and I could have died, sir, I nearly did, thinking of you and me and anyone who loses touch with the pulse of the life they once thrived on – but then! You revive me with 'Intact and Smiling', a swaggering number celebrating your independence from uncool relationships (“your dominating tendency is losing its appeal” – tee hee).

Most of all, though, there’s 'Safety in Numbers' and 'Tip of Your Shoe', two sides to one coin that I’m sure you’ve clenched in your pocket for a long while. The former is good, valiant as all coming-out ballads should be, but the latter – oh my stars, the latter. Sir. Sir. Sir. Bravo for calling Facebook a “21st century toilet wall”, and for calling out the worms who deface it (for that is what Facebook is, innit – a public platform for the rabble to etch their wit and/or ego onto) with their ungrounded, thinly veiled hate. You phrase the line ”the world needs a hero / and this is your chance” like you’re plunging a knife into the offender’s eye, with such a lovely sad descent on the piano that you really did yank my breath for a second. And I love you for that, Mr. Howard.

To conclude - please know that I think your album’s magnificent – even the tracks that I thought were the weakest, like the aforementioned 'Safety in Numbers' (it’s glorious, but sluggish as honey) and the unabashedly Bowie-esque glam slam “Control Freak”, have grown on me, and now everything fits together. And I thank you, Mr. Howard, and the Night Mail, for being such great company, even if we never meet in the flesh.