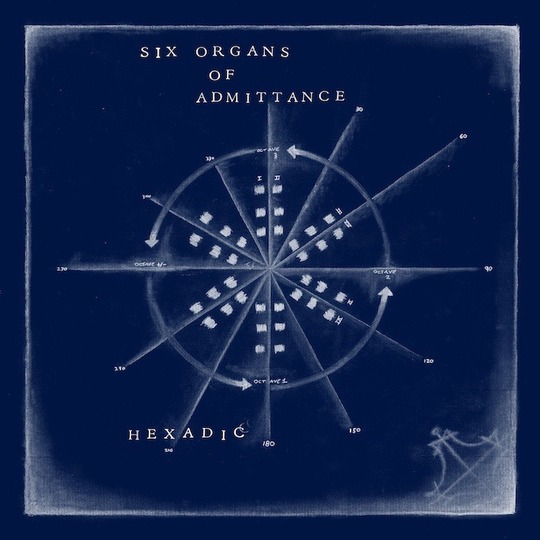 When I’ve got a hangover, I like to listen to abrasive music. Something with a bit of unease. It’s a litmus test for how the rest of my day will go. It will either force me to get up and move past my self-inflicted malady, or drive me further towards the dark corners of the house. Time-worn favourites include In Utero, The Holy Bible, Out to Lunch and The Shape of Punk to Come. It’s likely that this practice isn’t shared by many people, but it’s always worked for me.

I had a particularly caustic hangover recently, and decided to put on the new Six Organs of Admittance record, Hexadic. It was my first time hearing it, and halfway through the third song, ‘Maximum Hexadic,’ I threw up. Upon subsequent attempts to digest the album, I discovered that this had bred within me a particularly low-budget Ludovician response, and each guitar note that rose above the obscene levels of gain threatened to relieve me of my most recent meal. However, as this erroneous tale of woe will attest, my forays into music consumption betray more than a hint of masochism. I returned to Hexadic often, and each time left more appreciative of what Ben Chasny had achieved.

In the accompanying press release, Chasny expresses his desire ‘to make heavy music with as few heavy signifiers as possible.’ In accordance with this, there are no drop-A riffs, no power chords, no blast beats and no diversions into conventional song structure. In place of all those things, we have ‘the Hexadic system,’ a Chasny invention that forms mirror groups of ascending and descending scales, then pushes them to their limits with volume and distortion. If you’re a fan of Six Organs’ previous, beautifully fingerpicked, pscyh-folk, emesis may be the least of your worries.

It’s rare to find an artist so willing to stretch themselves that they create an entirely new way of writing music. From the listener, Chasny demands the same objectivity. When he referred to pre-release taster track ‘Wax Chance’ as 'the pop song' on Twitter, I thought he was kidding. He wasn’t. It’s the most approachable of the ‘heavy’ songs by far, yet it conjures images of pre-destruction, end-of-set Nirvana jams, where Dave Grohl and Krist Novoselic would attempt to drag meaning from Kurt Cobain’s feedback squall.

That doesn’t mean you should stay away. Far from it. Amid the noise, there dwells a huge love of melody, and it never feels like a concession. ‘Hesitant Grand Light’ offers up tremolo-picked acoustic runs, while the closing trio of ‘Future Verbs,’ ‘Vestige’ and ‘Guild’ are genuinely gorgeous, combining post-rock dissonance with spacious piano chords. You’re both grateful for the respite and eager to return to the start, which only increases the time spent in Hexadic’s company. Like the system from which it sprung, the LP is cyclical, and only begins to make sense when played through twice in succession.

Albums such as this one will often be defined as ‘difficult,’ and the love of its content will derive more from muso appreciation than genuine affection. Six Organs of Admittance have sidestepped this by crafting a piece of work that diefies categorisation: it feels mathematically precise, painstakingly composed, entirely freeform and joyfully performed. Sometimes all at once. On top of this, it’s aggressive, gentle, patient, cluttered and sparse. I’m confused as hell, and I hope you will be too.