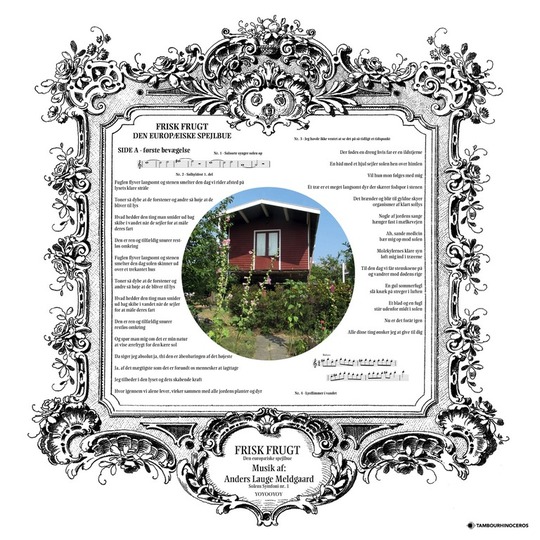 ‘Kaleidoscopic’ has never been so apt a descriptive for anything as for the music of Frisk Frugt. The nom de plume of Danish composer and multi-instrumentalist Anders Lauge Meldgaard, Frisk Frugt is the sound of meticulously realised micro-symphonic chaos, colliding north European folk forms with an utterly absurd array of outside influences in beautifully illogical collagic song suites. Meldgaard’s counter-intuition was put to full use on his last album, (deep breath) Dansktoppen Møder Burkina Faso I Det Himmelblå Rum Hvor Solen Bor, Suite (which roughly translates as ‘Danish Folk Meets Burkina Faso in the Sky Blue Place That is the Home of the Sun Suite'), but while that first album quickly paid off the listener with sunny tropicalia and 4/4 beats on the titular second track, Frisk Frugt’s latest opus takes its sweet, pointedly illogical time with us. Think Schoenberg re-arranged by Van Dyke Parks. And the results are as bizarrely breathtaking as Dansktoppen.

As the title suggests, Den Europæiske Spejlbue (‘The European Arch Mirror’) sees Frisk Frugt’s sights set firmly on European and Western Classical traditions, albeit reformulated through his playfully manic compositional process. What’s more, Meldgaard’s fractured vocals, spinning often very beautiful poetic lyrics (in his native Danish of course), are more central than they have been before, and his words reaffirm the album’s distinctly bright, pastoral tone, focusing on Spring time and new life. On ‘Jeg havde ikke ventet at se det på så tidligt et tidspunkt’ he paints a vivid picture of nature’s emergence: “a yellow butterfly / scoring zigzag lines in air / a leaf and a bird / stands outside amid sunbeams / now it is springtime anew”. The instrumentation contributes further to the picturesque rolling pastures and sunlit gardens Meldgaard evokes, employing several guest musicians to realise the near-symphonic scope of these compositions, including brass, string, woodwind, and several additional vocalists to supplement Meldgaard’s own synths, samplers, melodic percussion, and fuzzy guitars (as well as countless other odd musical gadgets, toys and homemade oddities).

Frisk Frugt’s has made it clear, the aim is to work in a ‘fantasy world where new things are possible’. On the two-minute instrumental interlude that opens the album we hear arrhythmic smatterings of percussion paired with bagpipe-like woodwinds, skittering keyboard notes and snatches of nasal breathing - by all expectations it should be a cacophonous unlistenable avantgarde mess! - but instead we hear a wonderfully sweet overture. It’s something Meldgaard proves to have mastered across Den Europæiske Spejlbue, twisting odd, uninviting instrumentation into ultra-pretty (albeit often cartoonish) music. Despite the organic overtones of the European springtime Frisk Frugt revels in, an unexpected cousin of the album has to be Frank Zappa’s hugely dated instrumental 1986 outing for Synclavier, Jazz from Hell (and perhaps the playful dada of Lumpy Gravy, which saw the great FZ leaping on the possibilities of sampler technology to compose instrumental music even his virtuoso comrades couldn’t conceivably play for real. What’s more, Frisk Frugt’s music is as seriously fun as it is seriously complicated - FZ would have loved it. The album’s not all bizarre interludes and mega complex mini suites though, with tracks like Sol og Måne (‘Sun and Moon’) and Kærlighedsang nr. ? coming to life over a plucked acoustic guitar in almost-standard folk style.

The first 11 of the album’s 12 songs plays as one single suite, with tunes emerging and re-emerging, sometimes with new words - and words sometimes re-emerging with new tunes. Along with Meldgaard consistently refraining from a full on crescendo, the re-emerging melodies lend the first 45 minutes of the album a dizzying cyclical quality. It’s confusing, and hard to map out - but of course, that’s the point! For a climax, Frisk Frugt once more salutes the sun on the 16-minute-long twelfth track, 'Omdrejningsmusik solens mekanik' (‘Revolution Music Mechanics of the Sun’) - an instrumental piece which drones on an upward curve for an almost 12-minute long crescendo replete with triumphant noisy guitar and drum noodling as snatches of dozens of instruments and themes from the rest of the album fly past amid the chaos. It then finishes serenely, with four minutes of blissed out playful flute and a collection of tinkling notes that sound like pre-schoolers jamming in the music section of Toys R Us.

Normally, music this avant-garde isn’t supposed to be so much fun. It’s where Frisk Frugt outstrips almost every other new composer working in Europe today. The album - and in particular the lyrics - were purportedly largely inspired by Meldgaard’s research into Danish folklore and poetry, and the influence of European folk and lush Baroque is clearly present throughout, yet Frisk Frugt remains a true original. This music is totally weird, and yet totally beautiful. It’s absurdly complicated, and yet absurdly playful. Whatever it is, the word hasn’t been invented yet. It’s just brilliant. It’s Frisk Frugt.