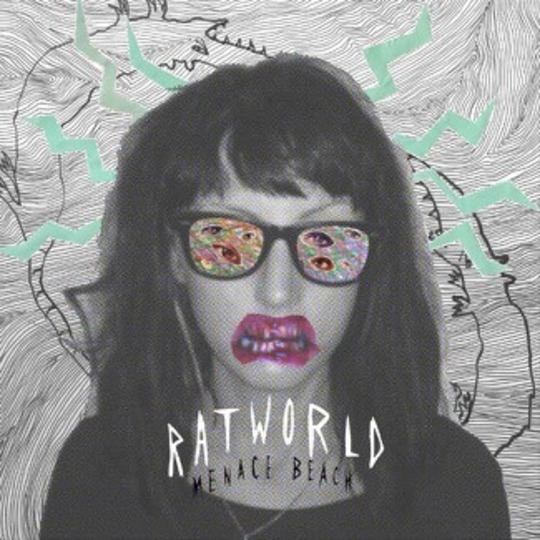 We’re living in a bit of a second golden age for lo-fi, Nineties-indebted indiefuzz, all stompboxes and slightly distorted vocals, spidery lead lines and big hooks buried under wavering dischord. At the very centre of the nu-grunge quake are Menace Beach, who do it better than most. Leeds duo Ryan Needham and Liza Violet have been at this for a few years now, joined by a revolving gang of support players picked presumably because they were passing the rehearsal studio carrying the right kind of fuzz pedal. Previous cast members have included members of You Animals, Pulled Apart By Horses and, er, Mansun. These days the line up has settled, overseen by Hookworms’ MJ Johnson who assumes a sort of ‘musical director’ role here, and filled out by Sky Larkin’s Nestor Matthews and one Matt Spalding who - rather perfectly - seems to work for Slowdive’s management company. Those names might hint at the sonic goodies on show, but they’re far from the whole picture.

What sets Menace Beach apart is their ability to suspend charm within a sickly, weirdo world view. Ratworld, the band's debut, is doused with both and it sits like a glaze over the whole thing. Opener ‘Come On Give Up’, with its plea to ”give up, get lost with me now” invites us into a pastel-shaded world that, despite all the obvious musical touchstones (Pavement, Belly, Veruca Salt, Slowdive, My Bloody Valentine, the Mary Chain) belongs entirely to Menace Beach. The highlights are many: the way the little hooky riff and Violet’s “ah-ah-ah” backing vocals phase in and out of tune in ‘Drop Out’, the way the splattered, wonky punk of ‘Lowtalkin’ revs up, decomposes and starts again over a primitive, thumpy backbone; how ‘Dig It Up’s, lush, phazey, symphonic intro backs away from its poppy verses, or the cute-as-a-button bare-bones pop of ‘Tastes Like Medicine’ with its boy/girl harmonies... none of this is especially original: Menace Beach could have existed fully formed 20 years ago, but there is something that feels unique to Needham and Violet.

Their strength is partly in the bulletproof melodies found beneath the washes and drones. ‘Pick Out the Pieces’ is understated pop, with a shiny, red-toffee-apple of a chorus. ‘Blue Eye’, Violet’s solo vocal moment, is a gorgeous thing; her vocals floating over a slowly swirling pool of noises, like a daydream over the dead sea.

What’s odd is that despite the sweetness of the package, the world of Menace Beach is a pretty weird, uncertain place. The “wheels have fallen off” in the title track, which is quite telling. The record is steeped in lyrical uncertainty, insecurity and quiet fears, reflected in the wobble and drone that even their most gloriously poppy moments are filtered through, like listening to a treasured mixtape on an old cassette player when the batteries are on the verge of running out. Its very affecting, and provides a counterpoint to the innate charm of voices and tunes which could come off as over-sweet in other hands.

Faults? There’s not the greatest spectrum of musical ideas on show here, though the band know when to quit (the record is a sprightly 33 minutes,) and the plug gets pulled before you notice they’re repeating themselves. There’s also an over reliance on the sonic pallette of their Nineties forebears, but those feel like nitpics because Ratworld, despite wearing its influences on its sleeve, presents a world that is uniquely its own.