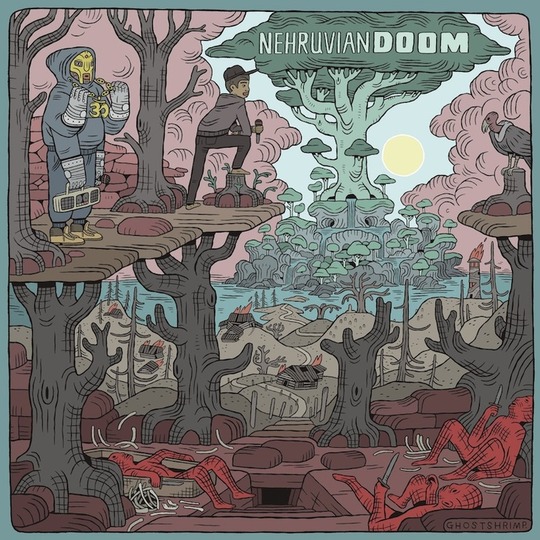 It’s hard not to get terribly excited whenever the name DOOM is labelled on a record. The man consistently constructs some of the most interesting and intelligent hip hop on the planet, with a solo and collaborative discography as long as your arm and a backlog of production thicker than a badly made Victoria Sponge. The man is as talented as he is enigmatic and has recruited a young new protégé for his latest outing NehruvianDOOM.

It’s no secret that a lot of today’s greats did not get there completely by themselves; no man is an island and in the ever expanding world of hip hop sometimes it is a case of who you know. Eminem and Kendrick Lamar would be nowhere near the heights they reach today without Dre; we can thank Jay-Z for the narcissistic brilliance of Kanye ;and there would be no Drake without Wheezy. The latest in this tradition of young hopefuls, taken under the wing of an established giant, is Bishop Nehru, a 17-year-old rising rapper who has been given guidance by none other than The Villain himself and is ready to remind you just how little you had achieved before you hit legal drinking age.

Although MF DOOM is no stranger to collaborations, this is the first where he really takes the opportunity to showcase young talent – the Madvillain releases were a coupling of two greats, where this sees DOOM pair up with a relative unknown. The synergy between the two is jaw-dropping; DOOM handles the production and, for the most part, Bishop Nehru looks after rapping responsibilities, with a poise and effortlessness way beyond his 17 years. DOOM isn’t the only one to notice; Bishop was first discovered by Nas and put on his Mass Appeal imprint and has already been on the receiving end of critical acclaim on both sides of the Atlantic.

Straight from the off, DOOM’s input is clear; ‘First Day of Class’ acts as an introduction, weaving together typical guitar led beats packed full of vocal samplings and off kilter rhythm. There’s nothing ground breaking here – it is all very familiar to DOOM aficionados - but it does serve to ease us in to an album packed full of quirky production and insane rapping finesse from Nehru. ‘Om’ encapsulates Nehru and DOOM’s master/apprentice, father/son relationship with DOOM’s low, throaty vocals reoccurring throughout the track’s chorus and Bishop’s classic East Coast gabber taking centre stage in the verse.

This relationship is a constant throughout – DOOM allows Nehru’s rapping talent to shine abreast to his idiosyncratic production style. There is a real sense that DOOM has complete trust in Nehru’s ability, dipping in vocally only on a couple of tracks. It is this relationship that makes the record such a success – there isn’t the ego and jostling for position that you might find on some of Wu Tang’s records, or on Jay-Z and Kanye’s Watch The Throne; both share a respect and appreciation for each other, both stick to what they know best and it shines through.

In ‘Coming for You’ Nehru throws down his ambitious intent to be the next best, spitting “Emperor Nehru we’re coming for you” in the chorus, describing himself as “The underrated, underpaid, but still most amazing teenager making music since the cavemen”. The beat has been somewhat stripped back from DOOM’s usually more wacky production; another instance where the mentor panders to the apprentice’s strengths – easing out as much of his brilliance as possible. It again reasserts that the spotlight is on Nehru, DOOM willingly takes a back seat in the hope of propelling his young protégé’s career. No more is this obvious than within ‘Caskets’, one of the rare points in the record where the two share the mic. The beginning sample vocalises an overarching theme in one of those signature introductions where DOOM chops a sample together with a recording of his own name: “Young Blood. He’s smart and he’s tough, but he’s got a lot to learn about survival and the man he’s gonna learn from is DOOM”.

Throughout NehruvianDOOM the production is consistently on point, vocals are sharp and the shining talent of Bishop Nehru is given to us in all its glory. There are lines that exhibit the teenager’s wisdom way beyond his years and a relationship that is as much give as it is take for both parties. It doesn’t seem to me that this is the record to propel Nehru to stardom – DOOM still works too much on the peripherals for that – but it is a vital step on the road to widespread notoriety. Most rappers don’t get a collab of this calibre this early in their careers and it is a true testament to the natural ability of Bishop Nehru. DOOM has taken a backseat in an attempt to mentor this young talent and under his guidance Nehru has put in a spectacular performance.