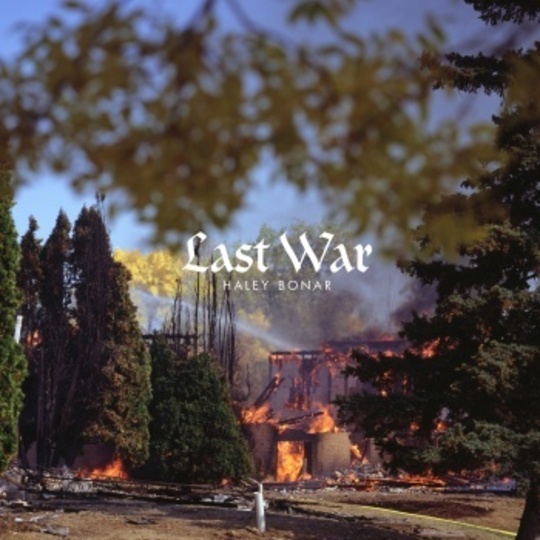 If you're already aware of Haley Bonar and any of her previous four albums then the direction of latest LP Last War may come as a surprise, as it violently extricates her from the safety of her alt-country/folk roots. If you are unfamiliar with Bonar, then it's safe to say you aren't in the minority, the prolific Canadian chanteuse having spent much of her career in relative anonymity on this side of the Atlantic.

Bonar's origins as a recording artist began in the early Noughties, with a break so fated, it almost sounds apocryphal: at 19 she was discovered by Alan Sparhawk, who - enamoured with her sound - asked if she would open for Low on their US tour. A year later she released her debut (2003's The Size of Planets) on Sparhawk's own Chairkicker's Union label and began to slowly make a name for herself as a purveyor of sweetly mournful folk. Since then Bonar has been relentlessly productive, releasing three further albums and a raft of EP's; steadily broadening the scope of her sound from the lo-fi minimalism of Lure the Fox and follow-up Big Star, towards the increased clarity and polish of 2011's Golder.

Last War - Bonar's first official UK release - finds her throwing us in at the deep end as she abandons subdued folk for visceral garage pop. 'Kill the Fun' opens the album with furiously catchy harmonies, low slung Eighties bass and a bittersweet tone that dress the stage for a tale of ill-fated romance. "If we could run forever then we'd never have to kill the fun" she sings, the dream of a short-lived lovers tryst undercut as her partner leaves for a: "...world where you never knew my name". It's followed by 'No Sensitive Man', which finds Bonar tired of emasculated modern men; her ennui erupting with the line; "Shut you eyes and play me something good/I don't want to talk" the last part screamed as the track spills over into a furious crescendo.

While 'Last War' and 'Heaven's Made for Two', the heaviest pairing on the album both employ Phil Spector-esque harmonies, lyrical repetition and a recursive falsetto guitars to build to a climax of shuddering, hypnotic feedback. And this change of tack for Bonar is - for the large part - convincing, but what's most surprising is how something that should feel like a huge gamble fits her sound so naturally. But in actuality she isn't making a vast leap: she's always written about ill-fated romance and the pitfalls of a life with a caustic vigour. And here she just dresses up those darker lyrical elements in a different garb, with the reinforced reverb and pounding percussion refreshing rather than further obscuring her intent.

The highlights are born out of subtler moments. 'From A Cage' is a lush lament, the baroque timbre of a Rhodes wafting over uncomplicated percussion; damaged hearts explored as she sings "You were born in an ocean/I was born in a swimming pool" while Justin Vernon lends his voice to the soft layers of harmony. 'Bad Reputation' restrains her fire, for a country-tinged ballad about the fears of becoming staid; "After some thought on the subject I've decided that I've kinda lost it" sings Bonar. Her confessional tone taking on a poignant note when you realise Bonar's recently become a mother; "I feel a little lame, Like I'm kinda boring/ I wish I could see my former self/She'd be a fun girlfriend". While the album's finest moment 'Eat For Free', manages to retain the same levels of thoughtful songwriting she has been developing since the start of her career. Vernon who returns on backing vocals, interweaving his falsetto around Bonar a gentle acoustic guitar their only accompaniment as the central lyric "We eat for free, to put on a show for everyone" builds out of the chorus into to a sing-a-long mantra, closing the album on a sanguine note.

Last War's cover art is the image of a burning building; flames rising from its smouldering skeleton structure. And it's an undeniably neat metaphor for what Bonar is trying to achieve; razing the past to the ground and starting again, if not from scratch then at least from the shell of what was once there. While the LP isn't perfect - there are parts that need honing to force it from feeling too generic ('Woke Up In My Future') - for the most part it's a compelling collection, one which showcases Bonar operating in an enthralling new gear.