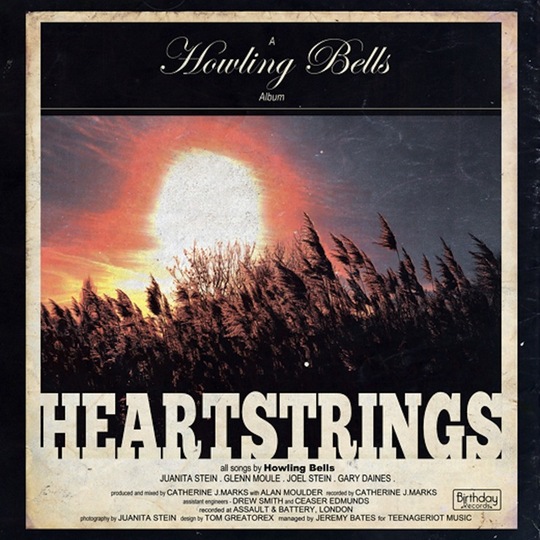 Back in 2006, a bunch of Aussies released a debut album that would put them at the forefront of the indie circuit. Howling Bells' self-titled offering was packed full of desert-drenched guitars, pulsating rhythms and smouldering vocals from frontwoman Juanita Stein and solidified their cinematic sound as one of the most exciting in recent years. Sadly, what to follow was not as exciting; 2009's Radio Wars was a confused dive into the electronic world, that had even the most loyal of fans struggling to press the repeat button whereas 2011's The Loudest Engine saw the quartet return to their rockier roots but with a lacklustre finish. The Howling Bells that stormed our shores almost a decade ago seemed to be lost forever.

Severing ties with record labels and taking time out for themselves seems to have done wonders for the band. Whilst the album wasn't exactly 'planned', Heartstrings sees Howling Bells sound more defined and confident than they have in years. Working with Foals and The Killers producers Catherine J Marks and Alan Moulder has also allowed the album to sound fuller than ever, in the way Foals' 'Inhaler' pretty much blew everyone's ears off. As soon as the echoing, grungey riff of 'Paris' opens the record, it's like the last two albums never happened. Juanita is back to her husky yet feminine vocal, often tailing off into the odd gorgeous falsetto, giving the opener a real bite in terms of sing-a-long-ability. This is a song that says, 'We're back, bitches'.

Howling Bells have often harked back to the soundtracks of eerie cult cinema. Here, that's explicitly evoked by the cover art and Heartstrings certainly sets a scene, song-by-song. 'Possessed' smacks you in the face with immediate angry, frantic strums as Juantia shouts "I've come back" that breaks down into a juxtaposing pretty bridge before abruptly finishing at a short 1.50. It's proof that this is a record where the band are focusing on their strengths - creating an atmosphere with a damn good dusty riff and a simple, yet addictive backing beat. This beat aspect takes centre stage with 'Your Love', bringing the drums to the forefront making for a climactic and epic instrumented surge. Juanita's repetition of the title may get a little tiresome but the overlapping harmonies and backing vocals allow them to eventually come into play with the rest of the instrumentation.

Single 'Slowburn' is up there with 'Low Happening' and 'Setting Sun'. It could easily have slotted onto their debut with its catchy, stay-in-your-head-for-days crescendo chorus and the guitars sound absolutely full of depth in terms of production. The repetitive lyrics aren't a problem here, as Howling Bells so often demonstrate their ability to produce a hit in under three minutes. However, the repetitive lyrics do get a little tiresome and the metaphors a little obvious with 'Tornado', which is disappointing, as the instrumentation is often so full of cinematic glory. The band also love a good ballad and here we're faced with 'Euphoria' and 'Paper Heart' which, thanks to some tinkling xylophones, echoing bass lines and the band's token guitars, allows Juanita to really shine. The key changes on 'Paper Heart' are particularly beautiful. It does however, slow the album down a little too much, almost squashing the energy the first few tracks had mustered.

Finishing with the grungey 'Original Sin' and 'Reverie' before ending with the slow-paced title track, this is a band back to their best. Confident song structures, accomplished, fearless vocals and beautifully put-together instrumentation, Heartstrings will coax the band's early fans into forgiving them for their previous offerings. Stick to the guitars guys, you sound wonderful.