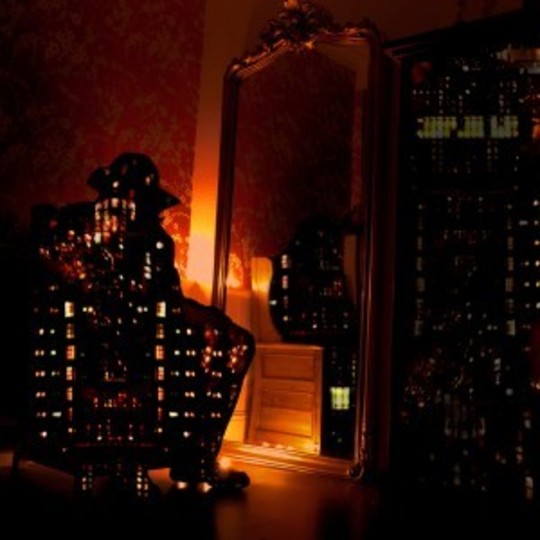 It's a well-worn trope to describe any and all instrumental music as ‘the soundtrack to a film not yet made’. If Kosloff Mansion, the latest offering from Hallock Hill, was indeed to soundtrack a film then that film would have an awful lot of scenes of the lone protagonist staring thoughtfully out of a window that was being gently flecked with raindrops. Michael Bay would not be involved.

Tom Lecky, he who records as Hallock Hill, is a talented and distinctive guitarist who works within the more ‘ambient’ end of instrumental music. Here, though, he abandons his guitar in favour of often disjointed piano notes that pitter-patter down through each track until they are joined by the occasional rumble of thunder.

Kosloff Mansion never feels threatening though: this thunderstorm is something that the listener experiences from the safety and warmth of the inside, admiring the lightning through double glazing. Most of the tracks on it feel poised, teetering on the brink between composed and improvised. Piano lines fragment and notes hang in space, often seemingly unconnected by pattern or melody. There are passages on this record that sound almost exactly like my six-year-old daughter trailing her fingers up and down a piano keyboard, spilling out notes for her own entertainment. It is to Lecky’s credit that this fragmented piano sound, which could quickly become irritating in most hands, never does. The disjointed piano lines do half-coalesce and then threaten to build towards something half-glimpsed. Tim Hecker’s Dropped Piano sketches would be a good frame of reference for the way in which Lecky builds up towards a coherent atmosphere through the piano on this record.

What’s impressive about Kosloff Mansion is the amount of space and silence on the record and how well this is used. Many artists in the ambient/drone/improv/whatever spheres tend to fill the frequencies much of the time and present the listener with a wash of enveloping sound; every track on Kosloff Mansion has the space to breathe.

In some senses Kosloff Mansion is a collaboration with The Lowland Hundred’s Tim Noble. Apparently Lecky composed the piano pieces and then sent them to Noble for comment. Instead of an email back saying 'Hi mate, nice fluid and evocative piano noodles, sounding good, keep it up, Love Tim', Noble commented on the pieces by including complementary sounds into the tracks. What this means is that the piano is occasionally joined by some quite understated and sympathetic electronics and effects at various points.

The electronic flourishes and the occasional rumble of thunder add to the ever-present piano to create a sound world that is constantly in motion, but remains consistent, almost static, throughout. It seems fairly clear that Lecky does not have the same mastery of the piano that he does of the guitar and that the formlessness of most of the tracks will limit the appeal of Kosloff Mansion. It is also clear that Lecky has a real talent for the evocation of atmosphere and that if you ever want to sit peacefully and watch the rain fall outside your window then you could hardly ask for a better soundtrack than this.