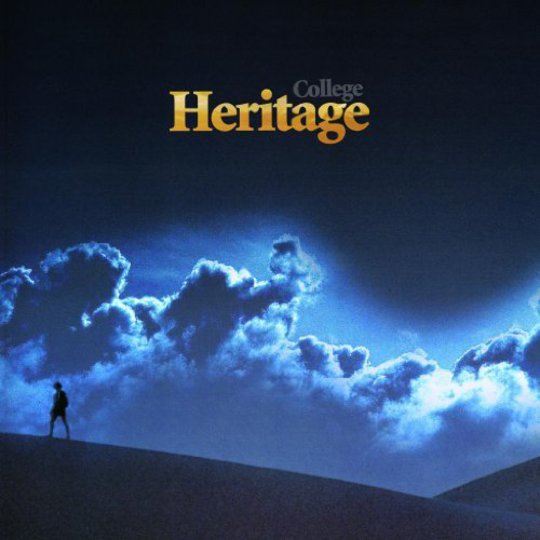 After that song was featured in Drive, French electronica producer Dave Grellier was always going to go global, and rightly so: prior to the 2011 Ryan Gosling movie College was just a member of the Valerie collective, the go to source for replica Eighties disco with a vinyl collector fan base. After ‘Real Hero’ went viral, the replica disco sound was in demand, and so there are cynics who’ll accuse Heritage of being a cash-in album; a record so awash in Cold War synths that it more or less forces anyone who hears it to buy a white jacket and stare into the middle distance. Followers of the Valerie collective will know that this is precisely College’s sound, the same one he’s been immersed in since 2008’s Secret Diary, and that if anything, Heritage takes the rather bold gamble of resisting guest vocals, the key ingredient of College’s biggest hit.

Instead Grellier dishes up a brooding landscape whose formula can be guessed by the opening track: throbbing synth bass, shrill arpeggios and a sense of Eighties nostalgia so vivid you’ll believe you can fly a push-bike. ’Une Ville Silencieuse’ features yearning, looping pads, while ‘Nouveay Chapitre’ reverts to valiant keyboards and hi-hats. It sounds airy but melodic, like the GTA pause screen, though it’s the first time there's the worry Heritage could be a dozen ‘Real Hero’ derivatives. By the time you get to the bumpy ‘Le Choix’, those descending bass notes are starting to grate.

Fortunately Grellier includes enough moments of excitement to keep Heritage less of a soundtrack album and more a French disco LP stripped of vocals. ‘Départ’ piles scissoring synths, 4/4 beats and whirling sirens - on paper, not too different form the rest of the album, but in practice a belter that’ll have you reaching for the lasers instead of posing moodily in shades. Its triumphant four-note loop reappears again on ‘Frontiére’, where low-end carries a heroic keyboard theme, and again on the lunging bass/radio signals of ‘Piége’ whose repetitiveness is dissolved by hypnotic, nodding percussion. This is the side of the album that steps out of ‘Real Hero’s shadow, offering vivid Tron-like landscapes made of mellotron, pads, and snare drums you could punch sheet steel with.

The more melodic ‘Révélation’ tips the balance back to film score, and brings you to the swooning close of College’s disco adventure. Although nothing here is as iconic as his breakthrough hit, Grellier’s done the noble thing, focusing on the keyboards that open up a trapdoor to landmark electronic soundtracks. And the beats! Although there’s only really one of them - the crisp but reliable 4/4 thud - it’s used so well there’s no way you can’t succumb to its succulence.

The synth equivalent of chewing on a 40-minute fruit pastille, Heritage won’t get Grellier worldwide licencing gigs but it will put him at the front of the queue should someone put together a Flight of the Navigator live score event.