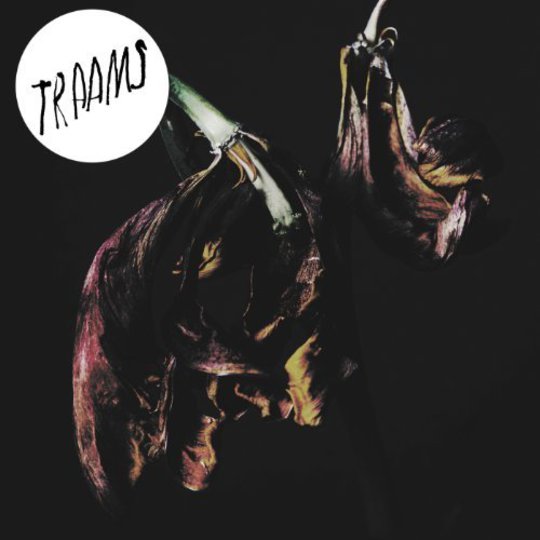 Forming a band to escape small-town boredom isn't exactly a new story, but it is, nevertheless, the story of Chichester three-piece TRAAMS, who formed after meeting at a club night started by vocalist and guitarist Stu Hopkins. 'We had to start a band. It was all we had,' said bassist Leigh Padley in a recent interview, and upon listening to Grin you can immediately tell that the band have taken that sentiment to heart - for TRAAMS have focused their restless energy into becoming an incredibly tight trio of musicians.

Album-opener 'Swimming Pool' sets out the blueprint for the band's sound - guitar, bass and drums all interlocked in a relentless, krautrock-esque groove and and tempered with with a post-punk fuzz. Repetition is absolutely a key element throughout the record - there's always something to underpin every song, be it the thunderous drumbeat on 'Reds' or the desert-rock guitar riffs on 'Grin'. There's also a definite pop sensibility to many of these songs - particularly 'Flowers', which has an undeniably catchy chorus hook, and 'Sleep', whose frustrated vocal combines excellently with its upbeat pace. There's also 'Loose', the closest thing that the band have to a straight-up rock song, complete with showy guitar riffs and a relentless, cymbal-heavy beat.

The main counterpoint to the band's meticulous playing is Hopkins' far more relaxed approach to his vocals and lyrics - his style of choice being a sometimes indecipherable slacker-rock yelp, and his lyrics often focusing on day-to-day problems. 'Demons' touches upon desperation for cash ("And it ain't that funny when you're out of money and the devil's trying to bail you out.") and 'Flowers' celebrates a blasé attitude towards attraction ("I don't even know your number/And you don't even know my name."). He has feelings too though, and can be disarmingly honest about them at times. The lyrics of 'Fibbist' touch on heartbreak ('I won't forget to try and forget you/It'll be hard but I'm willing to try"), while 'Sleep' takes on a more bitter tone ("What we had was true/But I can't get over hating you.").

The band truly demonstrate their ability to hold down a groove on the pair of seven-minute-tracks that feature on the album. The first of these, 'Head Roll', starts out in a more poppy vein, but then the vocals drop out and the song's mesmeric, driving rhythm section seamlessly comes to the fore - what follows is five minutes of intensely focused, calmly determined playing that's very easy to get lost in if you get on the right wavelength. Closing track 'Klaus', on the other hand, sets out its stall as a krautrock song from the offset, its motorik beat and menacing bassline complimented by Hopkins' echoey vocals and arresting guitar lines. It feels like a very gratifying realisation of the band's powers, and it's a fitting way for them to close out their debut record.

TRAAMS are clearly as comfortable with extended jams as they are with poppier, sub-three-minute numbers, and they should be commended for making an album that sounds coherent despite the apparently conflicting nature of these styles. Which direction they'll end up pulling in on future releases is difficult to say - perhaps they'll continue to make the tricky balance between the two. But for now, enjoy Grin - it's one of the finest expression of small-town resentment that you'll hear all year.