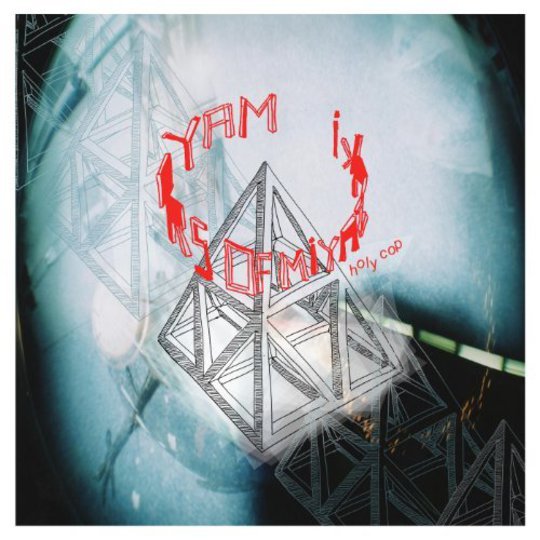 For their second full-length, London three-piece Mayors of Miyazaki have made an album that’s as cathartic as it is melodic. It’s a flag-waving effort that summons power from its discord, blasts out audacious riffs without being self-indulgent and describes the mundane with a lyrical grace that elevates boredom to an aspirational state of being.

There’s a lot that’s already working for the band. Their debut lit the right flames in the blogosphere and with indie radio, but Holy Cop declares its hardcore stripes from the first thrash. Accordingly, it ups the ante from a mere introduction to a statement. ‘Souvenir’ starts menacingly with a pounding floor tom and bass line to set a steady tribal beat. This builds into a maze of riffs, step changes and boy-girl vocals interplay. Guitarist Gareth Thomas cries “I’m burning a hole in the clouds”, bassist (and sibling) Claire Thomas retorts “spring fever at 10 degrees”. Everything feels manic, snatched and frantic but jars and sways with such power this can’t be accidental. The guitar and bass arrangements are calculated, well-rehearsed and perfectly executed. It’s the undeniable force meeting the immovable object over, and over, again.

‘Parts Per Million’ blends a selection of fine influences. Again it totters and tumbles in the verses, the guitars peal with the DC sound, Fugazi swaying under the weight of their guitars enhanced with a subtlety, something American Football did so well. The choruses are pure adrenaline, Versus breaking out a big chorus or Jetplane Landing when they scratch at the heartstrings.

Similarly ‘Dry Palm’ cuddles up to Jetplane Landing, or Jets To Brazil; the bedroom poet filled with the insecurities of today. “We made a case for progress, we made the start of something,” Gareth and Claire harmonise before the riffs lock in. This time the riffs are soft though, rich and warm. Going from this to the following ‘Muy Sexo’ is like hearing Television and Blondie warp into the Pistols and Black Flag. It’s beautiful and f$#king scary at the same time.

Every track on this release has guitar lines that beguile. There’s nothing here that’s guarded or cloaked, everything is open. They could be younger siblings to Blood Red Shoes. Their earnest approach may rile some - there’s no glamour and it has a sound you’d expect from something recorded at Southern studios; it’s tetchy, aggravated and raw.

Mayors of Miyazaki have made a powerful album and in doing so remind us how exciting, and vital, math-rock and hardcore music is, especially when you smash them together.