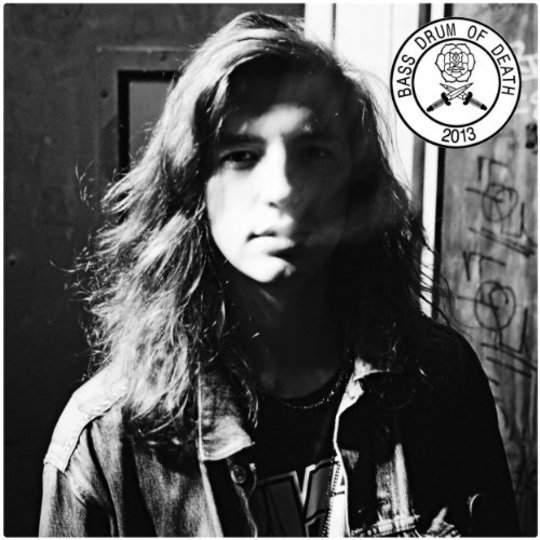 At first, John Barrett used to play his shows like a double-concentration version of the White Stripes. While Jack and Meg stripped their band down to the bare essentials of two people, a guitar and a drum kit, Barrett went one further – one man, sending out crashing bar chords whilst stomping out the beat through a bass drum. An album later, and Bass Drum of Death has expanded to a full live band, but Barrett continues to lay down everything on record himself, hopefully still in the insane, cartoonish one-man-band fashion of gigs past.

That’s not the only change either. Whilst his 2008 debut GB City was mostly new-wave and punk orientated, the self-titled second album has its ambitious, increasingly technically complicated little fingers in far more pies. Generally, the record has a slightly heavier feel, which is partially the result of the newly present bass guitar and the fat, stoner-rock riffs that ooze out of it.

That said, the Wavves, Black Lips, and DZ Deathrays influences are still very much present – and Bass Drum of Death does a fine line in scuzzy surf punk. Opening track ‘I Wanna Be Forgotten’ surges out of the speakers with a wall of fuzz, sounding like the sort of stereotypical 'I’m angry!' rock that James Franco’s character used to listen to on Freaks and Geeks. Just like FIDLAR’s debut earlier this year, Barrett uses the Beach Boys’ template to give the track a melodic lift by stringing faintly doo-wop “aaa-ow” backing vocals through the sludge. The driven, Misfits-influenced ‘Shattered Me’ will doubtless cause gallons of spilled beer live, as Barrett’s blurred vocals insist “No-one but me could live these shattered dreams”. ‘Such A Bore’ owes a debt to early Nirvana, embodying all the core principles of punk that you can dance to – the hook beneath all the FX is as strong as ever, but only ever varies in tempo, repeating ad nauseam while Barrett ruminates on people’s tendency to stay the same and grow dull.

Elsewhere though, Barrett has pushed the project on, and spilled across into a neighbouring genre. Once you’re in the garage, there’s only so much to entertain you. Stoner-rock was only ever a toke away. There’s more than a hint of the Black Keys on ‘Fine Lines’, as the guitar line chugs out beefed up blues worthy of Josh Homme. Combined with the fat bass and a slight sense of paranoia (the chorus, slightly plaintively, repeats “All my friends are gone”), it creates a classic stoner sound. Later, with a pinch of pyschedelia, Bass Drum of Death’s foray into stoner-rock ventures into audibly Seventies territory. ‘Faces of the Wind’ is driven by a booming bass and an echoing bass-drum, with a simple riff that calls to mind Black Sabbath – a very successful homage to stoner-rock’s roots and some impressive drumming; it’s no wonder he can’t do it with just his feet any more.

Just two years on from Barrett's debut record, Bass Drum of Death shows a definite creative expansion – and he shows no sign of losing his way with a hook. Ranging across thrash and garage, surf-punk and classic rock, this isn’t an album that’s reinventing the wheel. But Bass Drum of Death is an interesting combination of influences, easily worn. Barrett knows he’s rehashing, but it’s fast, dirty and fun - so who cares. You’ll be too busy dancing and yelling to question the originality.