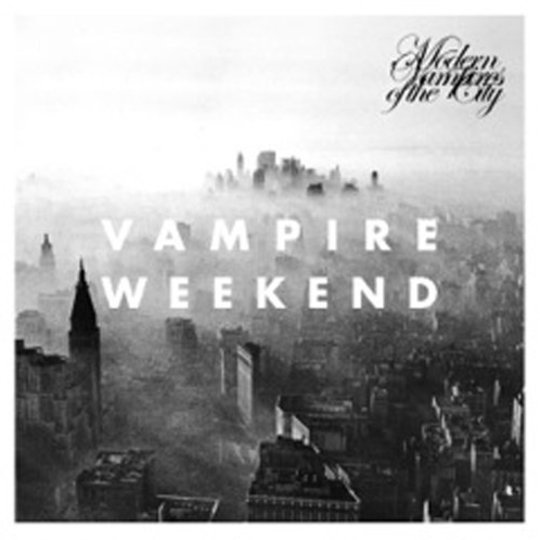 Let’s get some things out of the way upfront 1) the new record by Vampire Weekend is the best alternative pop album you will hear this year. Unselfconscious, technically brilliant in a way that crucially you will never actually notice, shimmering with beautiful, strange melodies and just a small smidge of actual bonkers. 2) Beyond this sentence, this review will not feature any of the following words or phrases: 'preppy', 'posh', 'college', 'Paul Simon', 'monied', 'Afro-' anything, 'fraternity', 'smug', 'button downed' or 'bafflingly sockless hipsters' (although in the latter case that’s a hard one to resist). We’re jettisoning those words because Vampire Weekend have stepped smartly away from all of them - they no longer apply as critical statements, not even as descriptions. Modern Vampires Of The City (bloomin’ marvelous title, FYI) overshadows such petty concerns by simply being immaculate, beautifully balanced and enthralling pop music.

Take lead single ‘Diane Young’, if only because it’s the one you’ve already heard. We know Vampire Weekend do great singles, we’ve clocked ‘Oxford Comma’, ‘A-Punk’ and ‘Cousins’, indie floor-fillers one and all. Small fry, dear reader. ‘Diane Young’ ascends into the post-millennial seven-inch-super-league, it’s within touching of distance of ‘Hey Ya!’, ‘Seven Nation Army’ and ‘Crazy In Love’, it’s dizzy with the exhaust fumes of ‘Can’t Get You Out of My Head’. Ezra Koenig and co-producer Rostam Batmanglij blend jugfulls of disparate musical ideas into a wonderfully refreshing pop smoothie, squelchy at the bottom, sweet and fruity at the top and all weird and fizzy in the middle. It doesn’t sound like any of the bands’ textbook influences or any of their imaginary ‘Brooklyn Scene’ contemporaries, it doesn’t sound of the past- it sounds how twenty-first-century pop should sound: completely of its time - released 20 years ago it would have been utterly baffling. The confidence here is staggering. Do you know how much confidence it takes for a hip indie band to use ”Baby, baby, baby, baby” as a hook? Unironic ”babies” are the property of Elvis, of Motown, of Madonna, of Prince, or Jacko, R Kelly and Mrs Carter, not guitar-toting NYC skinny boys, but that ”Baby, baby, baby, baby” warps, twists and pitch shifts its way through the 'alternative' pop record of the summer, and it works beautifully.

And that’s not even the best bit of the album. There’s ‘Ya Hey’s depiction of shattered faith, which we shan’t attempt to pick apart here because DiS’s Robert Leedham did it so beautifully in his singles column earlier this week (go and

Then there’s ‘Step’, elegant chamber pop that manages to sound sophisticated, layered and sparse all at once- no mean feat, and one Vampires... achieves throughout its’ bakers’ dozen tracks. Like our own Hot Chip, Vampire Weekend have the knack for sounding rich and complex with relatively spare arrangements. ‘Hudson’ is beautiful, a sombre, strange tale that’s as much choral piece as it is a scattery indie ballard.

The centrepiece of the record is ‘Hannah Hunt’, which feels like another elegant, piano-and-gentle-drum-plodder until its last third when it opens like a flower, it sounds passionate and organic, and completely joyful. Like a tiny pocket symphony version of the best part of Belle and Sebastian’s ‘Lazy Line Painter Jane’ It lasts just over a minute, at the very centre of the record, a soaring, swelling moment of complete balance and joy. If that 80 seconds was all there was of this whole album it would be still be one of the records of the year. Marvelous.