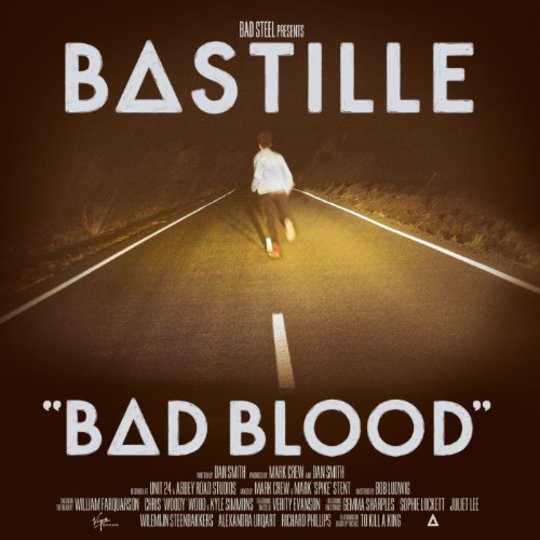 Let’s get this out of the way first: Bastille is not a ‘typical DiS Band’. It’s hard initially to put your finger on why: Dan Smith (for he effectively is Bastille) ticks a lot of boxes with his soaring and powerful voice, his intelligent arrangements and his acute ear for the dynamics of a perfect pop/rock song. There is an awful lot to love about Bad Blood, the debut Bastille record.

Where Bastille diverge from the types of artists that are usually feted on these pages though is in the presentation of their songs. With, for example, My Bloody Valentine the melodies are half buried under layers of fuzzed-out guitars and the listener has to work to uncover them: each listen delving a little deeper into the sonic morass and uncovering more and more treasure. Not so with Bastille: the 12 perfectly formed songs on Bad Blood are immediate; they reveal their charms on first listen which is both a strength and a flaw of this record.

If you can leave aside any anti-pop song snobbery and appreciate the big sing-along choruses with which Bad Blood comes amply stuffed, then you are in for a sonic treat. One of the things that you’ll notice about most of the songs on here is how resolutely up they sound. On ‘Things We Lost In The Fire’ (sadly not a collection of Low covers) Smith sings “We were born with nothing and we sure as hell have nothing now”, but with his powerful delivery and phrasing manages to make that line sound like a life affirming celebration.

Dan Smith doesn’t just possess a remarkable voice (despite being a technically gifted singer he has enough imperfections in his delivery to sound human and warm) he also has remarkable songwriting chops. Almost every track on Bad Blood contains a big anthemic chorus but, again, this strength is also a flaw: 12 big choruses in a row tend to blur and merge into one another.

Bad Blood boasts a good range of instrumentation, especially with its percussion: programmed beats blend in seamlessly with live drumming and tuned percussion (shown to great effect in the opening to ‘These Streets’) but in the mix everything is subsumed and secondary to Smith’s voice. Sometimes you are left wishing that the songs could be left to breathe a little more for themselves.

The cover of Bad Blood with its low-angle road-at-night picture and faux-cinema-poster look reminded me a lot of David Lynch’s Lost Highway. Peek inside the CD booklet and you can see that this is no accident: Smith is wearing a Lost Highway T Shirt in two pictures. The Lynch connection doesn’t end there either: the penultimate track ‘Laura Palmer’ is a well-crafted elegy to Twin Peaks' most famous corpse. What is slightly baffling is that a director as fiercely weird and unconventional as David Lynch seems to have had a major role in inspiring such a conventional and straightforward record (12 songs in 44 minutes, two ballads, big choruses, boxes ticked).

You only have to dig around a little online to see that Smith is capable of thinking outside the box far more than is displayed to us on Bad Blood: a far superior version of the highlight song ‘Flaws’ recorded with percussion and electronics replaced by orchestral accompaniment and numerous cover versions where Smith twists and mashes other people’s songs into new and strange shapes show a level of creativity and ingenuity beyond the rather staid imagination on display here.

There is, nonetheless, a lot to love about Bad Blood. Fans of the big pop chorus and powerful male lead vocal should snap this up. There is also a sense of being rather underwhelmed: over half of the songs on the record were available in one form or another previously and the ones that are new sound very similar. That said, Dan Smith has released more properly catchy songs on this one record than some bands manage in a lifetime and, if he manages to break the shackles a little, his future Bastille releases should be essential listening.