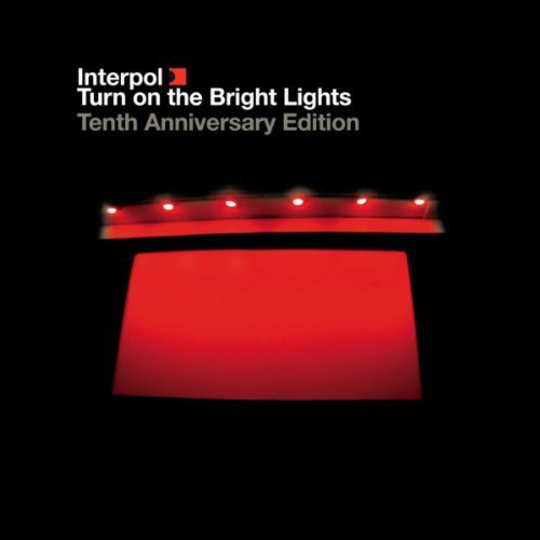 Interpol’s Turn On The Bright Lights is the only album I have had to ban myself from listening to. Music being the key to a whole heap of memories, this was a record I had invested plenty of teenage angst in and was now locked away on iTunes never to be touched again. So why on earth I would volunteer to review its Tenth Anniversary Edition? In short: curiosity got the better of me.

I wanted to know whether time had diminished the debut album of a band who arrived fully formed but who are now more fractured than ever before. Carlos Dengler left Interpol two years ago, taking with him a magnetic talent for plucking infinite sorrow from a bass guitar. Worse still, the remaining band members are now on hiatus pursuing other solo projects and, much like The Strokes, seem to view their day job as exactly that.

Thankfully TOTBL is still a miserable record to experience in full. Like Darren Aronofsky’s Requiem for a Dream, its horrors crash over you in a relentlessly mundane manner. There’s little drama in ‘NYC’ and ‘Obstacle 1’ yet their fog of intimacy is oppressive. Amidst a swirl of shrieking guitars and weary baritone, the private perversions of ‘Roland’ and ‘Stella...’ plead for your company so they can suffocate in shared isolation. ‘Obstacle 1’ is almost insurmountable, ‘Obstacle 2’ is inevitable and everything is purposefully vague so you can project your own anxieties onto the black canvas.

It is a wonderful record, but as is the eternal fate of all reissues, the tracklisting of TOTBL’s Tenth Anniversary Edition favours completism rather than quality control. At least with the demos on disc two of this re-release, you’ll understand just how much Interpol relied on producer Peter Katis to mould their songs. ‘PDA’ and ‘Leif Erikson’ sound worlds apart from their finished versions, lacking the endless, echoing sadness that will come to define them. On record Paul Banks’ could sing the theme tune to Postman Pat and threaten to be submerged by a wave of uncontrollable distress. In these early recordings, he’s positioned too high in the mix, dwarfing Daniel Kessler and co with an anemic drawl. No wonder Katis was signed up by The National to craft Alligator and Boxer into indie rock masterpieces.

Other than the usual array of B-sides and rarities, your real reason for re-investing in TOTBL is ‘Gavilan (Cubed)’. From the album’s surrounding sessions, this is the only previously unreleased track and a reminder of just how little material Interpol had at their disposal in their early days. A sprawling self-penned note to misery on a record that’s full of sprawling self-penned notes to misery, it’s dwarfed in stature by both ‘The New’ and ‘Specialist’. If you don’t own the Fukd ID #3 and Precipitate EPs, then this is an easy way to get your hands on ‘Precipitate’ and ‘Song Seven’ without becoming suicidal over the state of your overdraft.

All these 17 extra tracks really do is underline just how right Interpol got it the first time round. Some masochists will get a lot of pleasure out of poring over three versions of ‘NYC’ before deciding which one is the most gut-wrenching. They might even think TOTBL’s minor key tragedy is enhanced by a remastering job which is mercifully faithful to the original. Personally, I wish I hadn’t stared into the mechanics of an album which I’d left well alone for over four years. I’m sure this reissue experience has been therapeutic for everyone involved which is exactly why I preferred the underlying trauma.