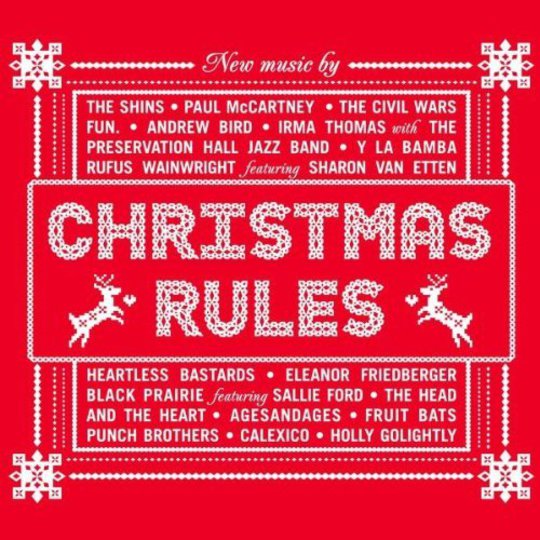 One of the biggest difficulties with putting out any new Christmas music – let alone an ‘alternative’ compilation – is that one of the season’s chief joys is that of doing, eating and hearing exactly the same things every year. We draw comfort from familiarity at Christmas: Scrooge will learn generosity; the Snowman will have melted by morning; Feathers will end up rammed into a milk bottle – exactly the same as last year, and the year before that, and the year before that.

It’s always a thankless task to be forward thinking with material which is so backward looking, and so a project like new compilation album Christmas Rules has its work cut out for itself to strike the balance between unique enough to justify its own existence, yet traditional enough to embrace and enjoy.

In this regard, Christmas Rules gets off to a shaky start with a self-consciously 2012 take on ‘Sleigh Ride’ from Fun, and a similarly post-modern airing of ‘Wonderful Christmastime’ by The Shins. It’s not without logic to approach fatally overplayed songs with the intention of bringing something new and current to the table but sadly, when dealing with a body of music wholly reliant on a sense of warm nostalgia, contemporary touchstones don’t really push the right buttons. 'Sleigh Ride' just isn’t meant to have flourishes of electronic rhythm going off like laser beams under an indie-chart vocal take, nor is 'Wonderful Christmastime' much embellished by the swagger of a fuzzy bass stomp marching through its final verse. Admirable as it may be to try and inject new life into the well-worn classics – it’s almost impossible to achieve to any level of satisfaction.

Thankfully, you can count on Rufus Wainwright and Sharon Van Etten, singing duet on ‘Baby It’s Cold Outside’, to add a sultry and sensual nostalgia to proceedings, marking the compilation’s abandonment of lacing time honoured seasonal songs with present-day trends and production techniques. Two voices around a piano is of course deliciously Christmassy, and the songs on here which sound the most naturalistic and live are the most alluring; loose, organic arrangements playing the old timers with a vitality they wouldn’t normally warrant but – fuck it! – it’s Christmas. It’s hard not to get a swell of goodwill from the upward swing of simple rhymes like “he’ll make December the one you’ll remember” when played with such a sense of lust for the season.

But, at the risk of sounding like I’m contradicting an earlier claim, the best cuts on here are those which manage to combine the cosy, intimate feel of Christmas arrangements and performances with songs which haven’t actually been played to death. A particularly strong one-two comes in the form of the darling rendition of criminally underplayed ‘That’s What I Want For Christmas’ from Holly Golighty, and a vibrant, jazz interpretation of ‘May Ev’ry Day Be Christmas’ by Irma Thomas. Perfectly channelling the treasured hallmarks of traditional Christmas music in an aural sense, these artists are well showcased by offering up songs which still have a few berries left on the mistletoe. By evoking the glowing Christmas mood without resorting to the same old songs, these numbers evoke nostalgia without the irritation.

Any Christmas release is going to come up against a glass ceiling sooner or later as it tries to negotiate the push and pull between various, unavoidable drawbacks. Do the same old thing, and it’s criticised for being done before. Do something new, and it’s criticised for failing to be Christmassy. It’s amazing, then, that Christmas Rules manages to be as successful as it is – negotiating these contradictory demands of Christmas music very gracefully for the most part, by marrying the sounds we love with the songs we’re least sick of. Sadly, it occasionally gets this equation exactly backwards, and at an hour long it’s a little overstuffed and could use a few trimmings, but Christmas Rules ultimately emerges as a pleasant evocation of nostalgia, delivered by artists who find both the melancholy and the joy of the season in a collection of spirited performances.