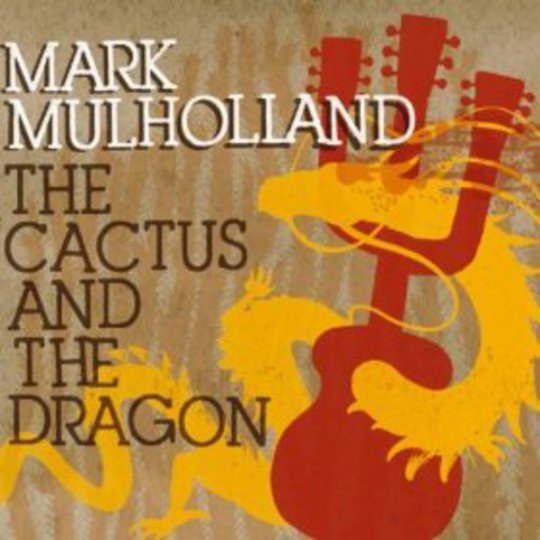 I sat down to write this review of Mark Mulholland’s new album at around midday today; it is now 18:55. The problem I’m having with writing this preamble is that I’m about to start discussing a twenty-first century indie-folk singer, a description that will no doubt bring forth memories of the likes of Camera Obscura and Scottish contemporaries Belle & Sebastian: in other words, twee farts of nothing that should by rights have you running for the nearest rusty scalpel with which to remove your own ears. But then I’d quite like you to keep reading this, so please disperse said images from your mind and give this album a chance.

Mulholland’s second record The Cactus and the Dragon may have the same roots in American folk pop as his contemporaries, but that’s where the similarities end. This is going back to the darker side of folk; scratched and discordant vocals – some his, some guest – that echoes Waits and Dylan (albeit with perhaps slightly more polished edges), an acoustic guitar that sounds surprisingly ominous... songs that aren’t in the key of C! For an album recorded in Berlin by a Scottish troubadour who has spend as much time wandering Europe as Mulholland, The Cactus and the Dragon has a surprisingly pungent scent of Americana.

This may not have the same kind of wretched desperation of Rain Dogs or the doom and dread of I’m Your Man, but even at this album’s lightest moments there’s a definite sadness: ‘Haunted Feeling’ intertwines soft guitars and an accordion beautifully, but talks of “reaching out for things that are gone, and they won’t come back’, and at the other end of the scale the urgently psychedelic title track closes the album with a fraught confession that “’The bottles on the board stand like pawns in front of me”.

It’s clear from just one listen to the album that Mulholland has a range of influences and enjoys a huge number of styles; what’s impressive is his ability to draw on them and create a collection of music that is, whilst varied, undeniably his. His voice and style lay somewhere between Leonard Cohen and Mark Kozelek, although the lounge piano, drunken vocals, slide guitar and hi-hat-heavy jazz drums on highlight ‘Footsteps on the Stairs’ are perhaps closer to Wilco’s ‘Jesus Etc.’. There’s also a sense of the epic looking to burst through on a couple of tracks: ‘Floodgates’ and ‘World Spins Round’ with their searing guitar solos could easily have tipped over into self-indulgent Matt Bellamy-like wankery, but do well to rein themselves in at under four and three minutes respectively.

There’s not a lot groundbreaking here, and those bored by Springsteen and Dylan may not get a lot of enjoyment out of this (although in fairness it does take some guts to stick a Johnny Cash-like straight country song called ‘Middle Lane Driver’ on there). Nevertheless, The Cactus and the Dragon, with its shades of dark green and brown and reeking of stale coffee from a roadside diner, is a seriously impressive piece of work.