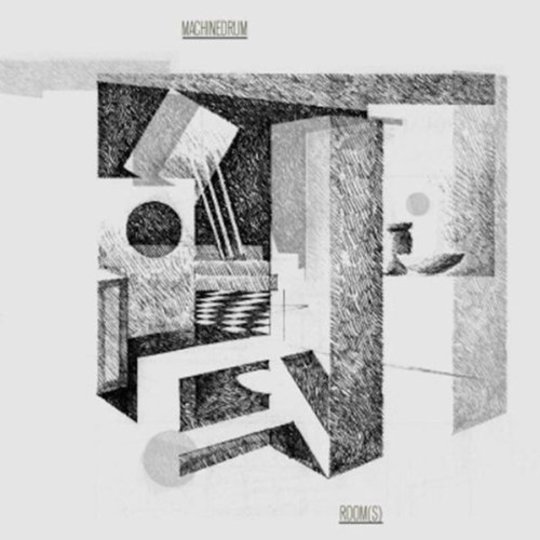 With ten years of releases already under his proverbial belt, Machinedrum is a mildly unusual signing for the tireless Planet Mu label, insofar as its head whipcracker Mike Paradinas tends to snap acts up while they’re still pretty new in the game. In respect of the actual music on this 11-track album, the sixth under this name by North Carolina producer Travis Stewart, it’s very much in line with what Paradinas has been pimping out over the last 18 months or so. Schmears of 808 hip-hop thump get thrown into the mixer (or, indeed, the washing machine drum) with airy femme vocals and intricate number-crunches of percussion owing a debt to Chicago’s footwork scene. Which is all very welcome, really.

That said, anyone who was following this guy back at the start of last decade, when people would hotly and earnestly debate about the extent to which the second Boards Of Canada album would be a gamechanger, reserves the right to see Room(s) as a bit of a curveball. Stewart used to make honest-to-goodness IDM with goofy titles and Japanese special editions and Brothomstates remixes, and got lashings of kudos from them folks what likes such things. Over time, and perhaps influenced by his background in hip-hop production, he seemed to start to care more about blowing dancefloors up than creating hoodie-over-yer-headphones mood jams. A mini-LP, Many Faces, on Glasgow bass imprint LuckyMe got the ball rolling last year, likewise a couple of rad twelves for Hotflush Records as Sepalcure (collaborating with Praveen Sharma); the styles being jocked on Rooms, terribly in vogue and terrifically fun at once, should bring round anyone suspicious about how late Stewart is to the party.

One thing he’s retained is a taste for ethereality, which also functions as a kind of psychedelia. Room(s) never threatens to be macho or bullish, even when the BPMs are cranked up to breakbeat hardcore levels. The stall is set out from the opening track, ‘She Died There’, the first of quite a few Machinedrum takes on footwork (others: the first half of ‘Come1’, which splices the subgenre with stuck-CD rave keyboards, and ‘GBYE’, which is the one thing on this album you really need to hear). All told, Stewart doesn’t seem ashamed to be a dance genre magpie: you might even say it’s essentially his M.O. Garage past and future gets turned over on ‘Now U Know Tha Deal 4 Real’ (hard to ascertain if he’s trying to say something with this title, but his 2001 debut album was called Now You Know). At other times, especially the title track, rhythms are fiendishly intricate to the point where you start tripping out while trying to keep up; this is as close as the album comes to his Sepalcure stuff, and the current Hessle/Hotflush sound in general. ‘Sacred Frequency’ displays a gilded shuffle that suggests Bay Area cosmic couriers like Flying Lotus and Daedelus. ‘U Don’t Survive’ has breakbeats like drum’n’bass trying to escape its own skin; ‘Lay Me Down’ is a jungle track that’s had its mechanism greased with sugar syrup instead of oil.

Up to a point, Room(s) is a great record, which performs clever and exciting tricks with a colourful palette and open mind. If you’re nailed to dance music’s bleeding edge, and/or harbour an interest in how the futurist styles of yesteryear are getting recycled, Travis Stewart has helpfully provided a primer. What stops it being Great, as opposed to great, is the feeling that Machinedrum’s basically working his way through segments of his music taste, having a crack at one after another. That is to say, he’s a follower, one now signed to a label that’s often been a haven for innovators.