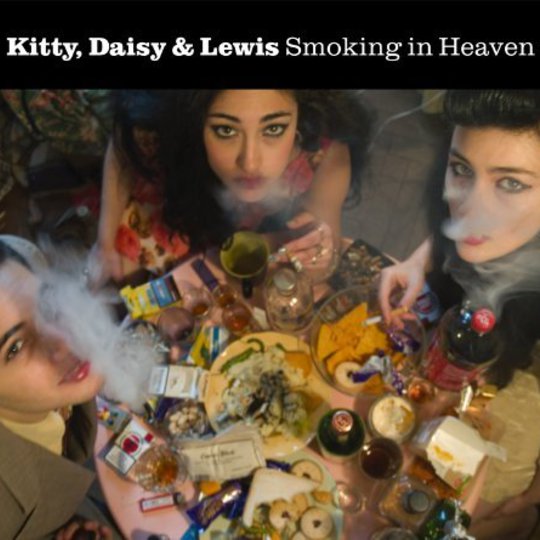 Teenagers Kitty Daisy & Lewis are a sibling band that could have easily been thrown back into the Tesco bargain bins of fixed era cover albums. With their large quiffs and Fifties rock‘n’roll swing sound, theirs is a style that reeked of novelty.

But surprisingly enough, the Durhams - as they’re known in a familial sense - gained positive attention for their self-titled debut, recorded when they were young teenagers. Fans of the band include Ewan McGreggor and Amy Winehouse, who is of course, a revivalist in her own way. Then there’s the fact they’re signed to Rob Da Bank’s Sunday Best record label and doing their own take on the Mystery Jets, they’ve included their mum (Ingrid Weiss, formerly of the Raincoats) and dad in their live line ups.

Whilst their debut was mostly comprised of covers, Smoking in Heaven is built up around original tracks. What’s more is that the band seem to have received a call from Marty McFly because there are some tracks that stylistically, are typical of future eras. There’s still the nostalgia that evokes the technical guitar energy of Chuck Berry or the calm exuberance of the Beatles but in essence, this trio of siblings from London are moving forward whilst staying firmly rooted in the same spot.

Opener ‘Tomorrow’ sees the band looking past their small black and white TVs and prim cheeriness with syncopated ska rhythms nodding along to rolling snares and the slightly Hispanic flavoured horn sections that escalate into swelling optimism, Kitty Durham’s voice exhibiting all the colloquial southern essence of Lily Allen’s ‘LDN’. But instead of singing with the same attitude of Lily, Kitty’s voice lingers on for longer before it takes a subtle traumatic and gasping drop as she sings: “Off on the roof/there’s nothing to do/now there can only be tomorrow,” striking a pessimistic note into the otherwise bubblegum sunshine outlook of the track. Production wise, ‘What Quid’s ‘Get Back'-ish chirp and cheer bass walk is turned into a filthy strut as it is grabbed by a warble of noise and distortion. However, with seven minutes of the same idea repeated and no development, you might be taking the quid out of your meter box and asking just 'What?' instead.

Meanwhile ‘Paan Man Boogie’ sees the threesome boogying like Little Richard on a quiet night in, clicking their fingers away to the sway and swivel of the jiving piano, soundtracking a dancehall of yester-decades teens. ‘Baby Don’t You Know’ is pure Etta James as the bass carries along Kitty’s sensual and romantic voice but whereas James’ lyrics came across with pure and innocent intentions, Durham’s voice rasps with a lustful passion. It’s sensuous. There’s a burning desire behind it but it doesn’t dabble in hyperbole as Durham confidently and slightly arrogantly repeats: “Baby don’t cha about me?” as if she were part of an infatuated fantasy.

So indebted to the past are Kitty Daisy & Lewis that it's hard to see there'll ever be much in terms of innovation or fresh ideas. Despite this, Smoking in Heaven is a still novel and mostly welcome dive into an often ignored and overlooked era.