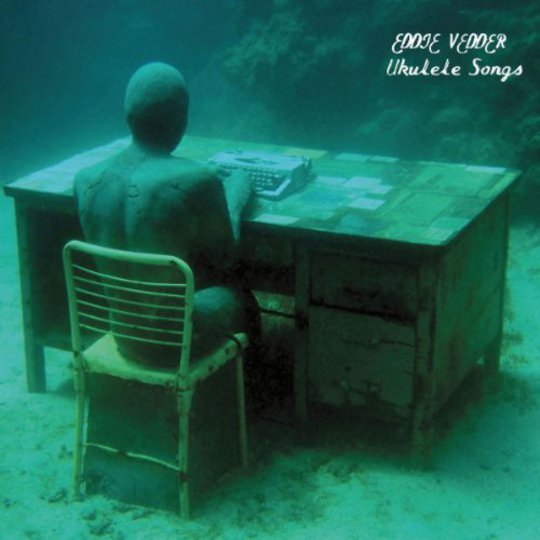 Eddie Vedder, on the other hand, knows how to grow old gracefully. There’s something very pleasing about the words 'Eddie Vedder Solo Ukulele Album' which almost merit a positive review merely on principal. The concept expresses both Eddie’s dignified, contented acceptance with the process of ageing and maturing as well as a bullheaded determination to do whatever the hell he wants. It’s the kind of eccentric project that Vedder’s dogged hero Neil Young might embark on if he wasn’t already busy brilliantly fannying around with Daniel Lanois’ collection of effects pedals and banging on about the merits of the electric car.

As such, it is a bit of shame that Vedder didn’t go the whole hog by only including the sound of the ukulele. A strict ukulele record. No vocals or anything. That would’ve been, as they say, proper hardcore. The only instrumental here is ‘Waving Palms’ which at only 37 seconds long could have been extended to greater effect.

But the Pearl Jam man did choose to sing over the top of the remainder of his uke plucking and on first listen there’s something odd about hearing such a powerful instrument, EV’s mighty voice, accompanied by nothing but the relatively timid tiny Hawaiian guitar. And Eddie doesn’t hold back, hollering, yelping, whooping, and crooning all over the shop whilst simultaneously tinkling away on those polite little strings. This is particularly true of opener ‘Can’t Keep’, a stripped down take on the PJ track which originally featured on the Riot Act album. With his frantic strumming and passionate vocal, Vedder still manages to maintain the song’s stomping spirit despite the absence of his usual muscular accompaniment.

It’s when Eddie calms down a little that the voice and uke fall into synch, become more effective and begin to sound less like novelty Pearl Jam cover versions; the delicately finger-picked ‘Broken Heart’ and the timeless melodies of ‘More Than You Know’ and ‘Sleepless Nights’, for example (- the latter features Glen Hansard on backing vocals, who succeeds in adding depth to the sound). Chan 'Cat Power' Marshall’s cutesy turn on ‘Tonight You Belong To Me’, on the other hand, is further evidence of Chan’s descent from respectable musician to slightly irritating waif icon. Much more successful is ‘Longing to Belong’, for which Vedder is joined by a melancholic cello, or the many tunes on which he simply backs himself.

Ukulele Songs is an album brimming with integrity and enthusiasm and, most importantly, it boasts great tunes. Like Neil Diamond, Tom Jones and their ilk stripping down their sound and dropping their pomp in light of Johnny Cash’s later recordings, we can only hope that Eddie’s endeavour inspires a similar trend amongst the aging alt-rock/grunge alumni; David Yow: The Banjo Years. Tad: The Skiffle Sessions. Buzz Osborne & Dylan Carlson: Monsters of Lute…