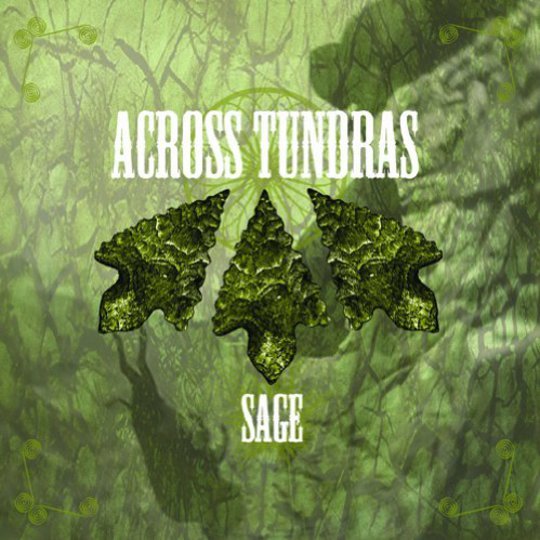 As yet it is unclear whether Neurosis’ master plan is to encouragingly push metal forward, to permanently subvert the genre in some manner, or to completely destroy it from within. If the group’s own records have increasingly embraced proggy atmospherics whilst retaining many elements that adhere to the metal blueprint, it is with their side projects and the other signings to their Neurot Recordings label that the band has really championed their enthusiasm for other musical styles and cross-genre amalgamations. From U.S. Christmas and Harvestman’s explicit love for Hawkwind, to Tribes of Neurot’s uncompromising noise drones, it is here that Neurosis reveal their true infatuations.

Sage is Across Tundras’ sixth full-length, and their first for Neurot, an appropriate home for a band that mixes traditional stoner rock riffage with psychedelic jams, less commonplace country influences and dusty Western soundtrack vibes.

Singer and guitarist Tanner Olson proclaims that 'This is by far the best AT album we’ve done', which is the kind of stock phrase that artists like (or are instructed to utter by some higher power) to utter when promoting any new record (Lord knows, it’s exactly the sort of expression that Dave Grohl has employed in desperately misrepresenting every lackluster Foos LP he’s excreted since 1999). Olson is partly right. When Across Tundras are at their best, as on the epic opener ‘In The Name of River Grand’, these Meat Puppets of metal achieve the inspired sound of Sleep having a bar brawl with Calexico in Ennio Morricone’s Martian space tavern. When the triumphant trombone kicks in towards the end, it feels like a revelation.

Second track ‘Hijo De Desierto’ sustains the initial high standard, and conjure up vivid images of deserts and rattlesnakes even if it didn’t open with a line mentioning both a desert and a rattlesnake. This is repeated as the penultimate line, just in case the listener’s mind had managed to somehow wander from the theme of deserts and rattlesnakes over the course of the track’s duration, which is unlikely. The lyrics tell the tale of some poor wretch stranded in the plains, starved of water and slowly dying, yet the laid-back groove of the track is so seductive as to make the idea of visiting the unforgiving sun-drenched sands pretty darn tempting anyhow.

Next is ‘Buried Arrows’ which continues the theme with further references to deserts, cacti and this time even buffalo. Yes, even buffalo. The difference is that this ballad is a duet (though still a fairly meaty, electric one) between Olson and guest vocalist Lilly Hiatt. Whilst the singers may fall short of emerging as a Parsons/Emmylou for the year 2011, they manage to pull off this relatively risky venture and avoid any potential embarrassment, Hiatt’s voice adding a new dimension to the band’s sound. And she’s sure got the lungs for it.

Unfortunately, Sage suffers from the affliction of premature eclecticism. Whereas the first half is an exciting and playful exercise in cross-genre experimentation without appearing too incongruous or contrived, the remainder of the record is disappointingly formulaic, with the Tundras falling back on reliable, largely forgettable generic stoner rock. Tracks in the second half are monotonous, lengthy, and resemble one another far too closely. ‘Mean Season Movin’ On’, is the strongest in this section, 12 minutes of sprawling, indulgent space rock with raucous vocals, but it only just manages to stand out from the preceding two tracks of similarly structured and similarly paced underwhelming plodders and is consequently too little too late. The closing piece, ‘Shunka Sapa’, distinguishes itself from the dreamy company it keeps only by its lack of a vocal track.

Across Tundras’ latest is a step forward and boasts some fine ideas. Maybe next time they’ll manage to keep it up for the duration.