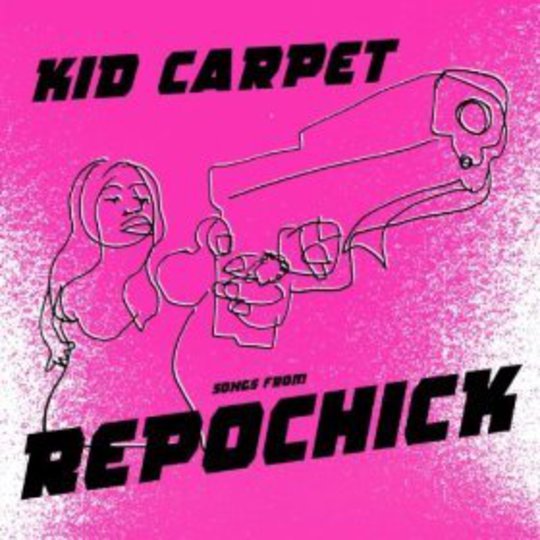 There are a few words that most people are right to be wary of when they’re used to describe music. ‘Quirky’ is one of them; ‘kooky’ is another. ‘Wacky’ is probably the most fearsome adjective of all. Let’s not forget, these are words that can be simultaneously used to describe such forces of poisonous evil as Jedward, Keith ‘Cheggers’ Chegwin and the dark overlord Timmy Mallett. These words aren’t negative terms by definition, but the way they are used has meant that they’ve adopted certain connotations, like when you describe someone as ‘bubbly’ because you don’t want to call them ‘annoying’.

Ultimately, they suggest that there’s something lacking – that ‘wacky’ characteristics are used to distract from the lack of any greater depth beyond them. Which brings us rather neatly to Kid Carpet. Born as Ed Patrick, Bristol’s Kid Carpet writes grimy rave-pop on a cheap Casio keyboard. His compositions are completed by an ensemble of jumble sale instruments which, over the course of his four albums, has included plastic toy guitars from Argos, a Furby and a Tamagotchi. Presumably Patrick writes his songs in this way because his music is so smart, imaginative and witty that he doesn’t need to compensate for it in any way by coating it with ‘wacky’ gimmicks or eccentricities. Errr…

Well, let’s have a look shall we? Structurally speaking, ‘On A Road’ is the first proper pop song on Songs From Repo Chick. Its chorus describes how, “if you want to go there”, you should “go there on a road” above a dreary two-note bass pulse and a childishly twinkling arpeggio. The lyrics offer some sound advice, such as “Hit the road but don’t hit the stuff that’s in the road / Don’t be the one that’s hit by the stuff that’s moving down the road”. Hard to argue with, sure, but as a piece of music it’s about as stimulating as driving down the M1 stuck behind a lorry that’s crawling at 30. And I’m pretty sure that’s not a conceptual trick.

So much of Songs From Repo Chick is bewilderingly humourless, despite straining for eccentricity. ‘Get A Job’, for example, is a song of frustration in the face of pressure to find gainful employment, which is a topic that you’d expect to be ripe for wry social commentary. But backed by a bland belch of a beat, the lyrics are the musical equivalent of waking up when your alarm goes off at 7am and rolling over to switch it off as you groan that you can’t be arsed.

There are some clever moments. The far less invasive ‘Shuffle’ gives you a tour of the personalities sitting around a card table, and Kid Carpet show skill in vividly summing up each persona in a few rapid phrases. Also ‘Last Word’, as an almost-ballad, really benefits from the child-like simplicity of the Patrick’s arrangements. But for every track like this, there are half a dozen like the painfully clichéd Saturday night antics of ‘Herd Of Cows’ or the nonsensical pseudo-philosophising of ‘In The Garden’.

The obvious counter-offensive to this review is to ask why everything has to be taken seriously, and what’s wrong with having a laugh? Well, nothing’s wrong with having a laugh. Alex Turner, Mike Skinner and Eddie Argos have all shown in their time that it’s possible to crack a one-liner in your lyrics while still making a point. Irish comedian David O’Doherty has done the same and actually been enhanced by the assistance of a Casio keyboard. But quirky, kooky, wacky Kid Carpet, lacks even the satirical self-awareness of Goldie Lookin’ Chain. And when the GLC become a worthy aspiration, something’s gone horribly wrong.