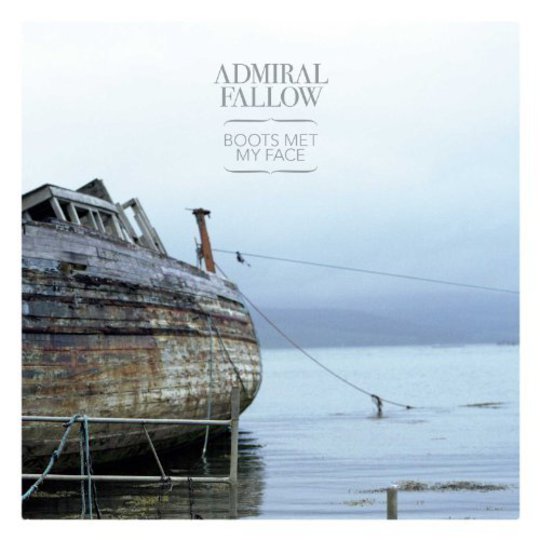 There are albums of which you can immediately point to a substantial list of flaws, but which at the end of the day win your favour by being unmistakably the output of a finely attuned group of musicians. This would make for an easy, but not quite accurate, summation what's great and not-so-great about Admiral Fallow's debut record Boots Met My Face (self-released north of the border last year). Firstly it's true that not a single track wants for melody and the arrangements crafted by the sextet are mostly gorgeous. Admiral Fallow eschew your typical expansive indie group line-up in favour of bringing clarinet, flute and double-bass within the main fold of the group. This pays dividends from the very beginning: 'Dead Against Smoking' wrongfoots the listener with smoky Manhattan-esque clarinet before hitting upon a tender mid-tempo acoustic plod subtly adorned with a recurring nuzzling clarinet melody and a gradual rising tide of violin.

The album's mid-section features BMMF's most expansive compositions in terms of both length and sound. It's pretty rare to still be taken as heart-stoppingly by surprise by a song as 'Old Balloons' manages when the cascade of tinkling ivories and chiming guitar is interrupted by a purposeful change of key and rhythm. Sure, anyone can throw in a dissonant chord or jarring rhythmic change, but it takes real melodic intuition to do it as beautifully as this. The fragile lyrical concerns (“Broken down liver and withered frame, lungs wrinkled like old balloons”) render the eventual hi-tempo passage of pounding drums and resonant piano all the more cathartic. The following track, 'Bomb Through the Town', begins with the delicate pipes of Sarah Hayes and spare electric guitar, gradually swelling into a semi-noisy crescendo. It doesn't quite fulfil the anticipation built up, but it's nice to hear a bit of musical grit to go with Abbott's lyrical honesty. If there's one major flaw with BMMF it's that sometimes the songs are a little too well crafted, even inoffensive, and in a manner that masks Abbott's intriguing lyrics.

'The Barren Years' is tuneful enough with nice call and response vocals, but is otherwise just a little bland, like Snow Patrol with a woodwind section. It's also perhaps a criticism that extends to Abbot's vocals; while his dulcet brogue will probably please many its lack of tonal variation glazes over his wry observations, where as conversely he's guilty of over-emoting on 'Delivered'. 'Squealing Pigs' does a decent enough job of being an up-tempo folk-pop anthem without sounding like Mumford and Sons, but it's frustratingly difficult to tell whether Abbot's pronunciation of ”dire reactions” as “diarrhoea ceh-shins” is intentional.

Two of Admiral Fallow's best songs to date are two of their most stripped-back. The gentle acoustic fingerpicking of 'Subbuteo' is a case of violence-tinged nostalgia (“I've returned for a while to the concrete that once claimed my knees and the stones my hands owned as I set them towards windows and trees...”), a darker tone mirrored in the solemn descending woodwinds, which finally culminates in some frenetic drums and pugilistic brass, sounding like a distinctly Glaswegian relation of The Suburbs. 'Four Bulbs' begins in equally stripped-back form and is ultimately less tumultuous musically, ending as it does in gorgeous harmonies. Nonetheless the lyrics are suggestive of the darker undercurrent of emotional growing pains, concluding “The noose around my neck has tightened too much to take” in a matter of fact manner.

Following 'Four Bulbs' is the cloying upbeat skiffle of 'Taste the Coast' before the spare closer 'Dead Leg' wherein the nearly unaccompanied Abbott once again reveals the records dark heart with talk of brutalising “wenches” preceding a plangent brass-laden instrumental outro. It'd be nice to hear the group talents utilised to such effect more often, yet it seems to be overly critical of Boots Met My Face's fluffier numbers. Abbot has described the record as being informed by the experiences of his youth and those he knows and on the whole it is a record suggestive of a reflective, varied and ambivalent view of the past as opposed to an altogether turbulent one. It proves Admiral Fallow, and in particular Louis Abbott, to be endowed with enough melodic, lyrical and compositional talent to believe that their best is still to come.