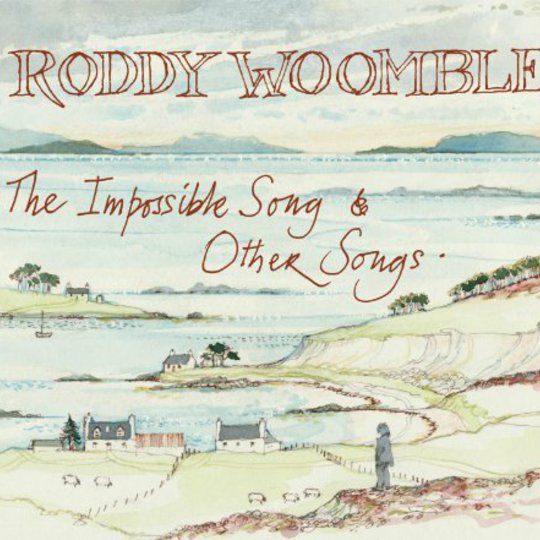 With Laura Marling and Mumford & Sons landing awards at a rate similar to which Charlie Sheen once (once, allegedly...) banged seven gram rocks, spare a thought for Roddy Woomble, erstwhile and maybe one day again frontman of Edinburgh scruffbag screamers Idlewild. His debut album My Secret Is My Silence, on which 'Woomble's fondness for folk music was made absolutely apparent' (as DiS said at the time) dropped in 2006. Landing in a music world that was embracing the fleeting fancy of new rave at the time, it couldn't have been much more incongruous if it had been released on wax cylinder only.

Five years later and the follow up, The Impossible Song & Other Songs, surfaces at a time when every post-graduate chin-stroker in plimsolls is in a ukulele orchestra and Topman is shifting tweed and waistcoats by the barn full.

So where does Woomble find himself in a world where wanting banjo lessons and the acquisition of an iPad 2 aren't considered conflicting desires? Despite having been recorded at An Tober, an arts centre on the Isle of Mull in the Inner Hebrides, at times The Impossible Song & Other Songs is not quite as smothered in Aran jumpers and pipe smoke as one might expect. While the opening 'A New Day Has Begun' contains the fittings of folk – banjo and fiddle – it sounds less like a hoedown and more like sunrise on the opening day of Glastonbury. Though actually, that's pretty fucking folk, isn't it?

Obviously folk isn't to be derided because it's currently surfing the zeitgeist (otherwise everyone would be saying the Big Society is a big pile of shi...oh), and indeed in places here it offers the ideal frame for Woomble's lyrics, which were understandably often obscured by the shock and awe of early Idlewild. Woomble's obviously come a long way since those days, when songs would often contain no more than a single line when he felt that was all there was to say, with The Impossible Song & Other Songs attempting to channel acclaimed Scottish fiction author Lewis Grassic Gibbon, Norwegian psychological novelist Knut Hamsen and Icelandic socialist writer Halldor Laxness.

While this particular writer's literary intake doesn't stretch much further than Grazia and Penguin wrappers, it's pretty obvious that Woomble has a way with a memorable line, be it "the rain fell like teeth against the window pane" from the cosy 'Tangled Wire' or "this house will be a ruin before you know/no matter how many times you wipe that table," which epitomises the lilting country swagger of 'New Frontier'.

However, while Woomble has a gift for an engaging lyric, the same perhaps cannot be said tune-wise. The aforementioned 'Tangled Wire' is, despite its imagery, little better than a thousand other knock off coffee shop Joni Mitchell's, while the jaunty but unremarkable 'Gather The Day' and 'Make Something Out Of What It's Worth', which contains a fucking clarinet solo, sum up an album, that in large parts, is just a bit too comfortable and even a little contrived. Is this folk for folk's sake?

Harsh? Yeah, and probably a little unfair, because in the angelic, metronomic 'Hour After Hour', the brass-powered 'Roll Along' and the achingly tender 'Living As You Always Have', Woomble proves that he has the chops as well as the words with which to wow. Maybe it's time to revert to the one-liners, eh Roddy?