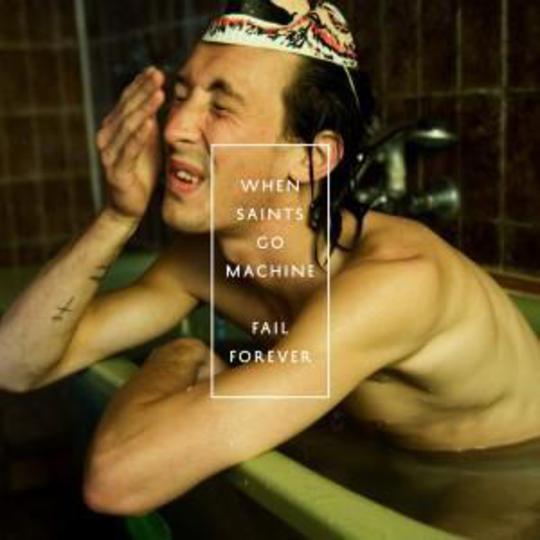 Nowadays, winning a national music competition is no sure-fire career win. In fact, it’s usually the final nail in an already rickety coffin. One minute you’re busting your lungs out in front of millions, the next you're chomping elephant testicles in a jungle with the bloated remnants of celebrity past (hey, look everyone, it’s Dom Jolly). So, as the Danish National Radio Talent of the Year Award winners, When Saints Go Machine have a lot to prove.

But should they? After all, it’s not the Copenhagen quartet’s fault that sceptical listeners are bodyswerving the shtick of hard-working competition winners. There’s more at play here than a purposeful loathing towards those who’ve done well; this is the rejection of music playing out like pantomime on millions of blinking boxes across the land. It’s what happens when a decade of aural diarrhoea lines the pockets of sycophantic arse-wipes and Dannii Minogue.

In just twenty-five glossy, star-striding minutes, WSGM do an admirable job of wiping away any detractors. Glistening with electro-orchestral compositions, the quartet’s debut Fail Forever is the sort of ambitious post-club fare that slithers effortlessly between dancefloor-cradling wooze and the heavy trance of a 7am comedown. Thankfully, it’s no by-product of a dollar-skimming conveyor belt; Fail Forever is the makings of something much more refined.

The band’s influences lie close to home: the nocturnal pop nodes that radiate from the album’s title track share an intellectual glow with fellow Scandinavians The Whitest Boy Alive and Fever Ray. But it’s the wailing strains of Nikolaj Manuel Vonsild that separates WSGM from the pack; his brooding, almost acrobatic, tenor gasps for air amongst the thick carpet of bass and tear-duct moistening cello.

High on complex arrangements, this penchant for the complicated has a tendency to muddy the record’s more ambitious efforts. Pirouetting around a Sufjan-like labyrinth of vocal loops, the bubbling rhythm of 'Pick Up Your Tears And Run' gets lost inside space-age drone, turning the track into little more than pedestrian electro-fodder. Likewise, 'Grey And Blues' is highly concentrated effects board wizardry, but the industrial site pounding quickly plods along as if exhausted by its own intricacies.

Bookended either side by these confusing swathes, the middle pairing of 'Pinned' and 'You Or the Gang' proves the record’s main pull. The former batters pneumatic drum and delicious key hooks into a dramatic slab of synthesised pop, while the latter’s suffocating rhythm gyrates to a sticky beat that sweats more sex than a trick-turning chanteuse on a running machine. Both intelligent and infectious, these cuts are fuelled on an aesthetic of gloomy self-reflection that’s not far removed from Arab Strap’s more energetic numbers.

As easy as it is to dismiss the Danish National Radio Talent Of The Year, Fail Forever suggests WSGM have some mettle to merit the accolade. There are some flaws, but this is a record that demonstrates the band’s expertise in creating smart electro-pop flings. And given the dearth of longevity in modern day competition winners, it could be the first chapter in a surprising success story.