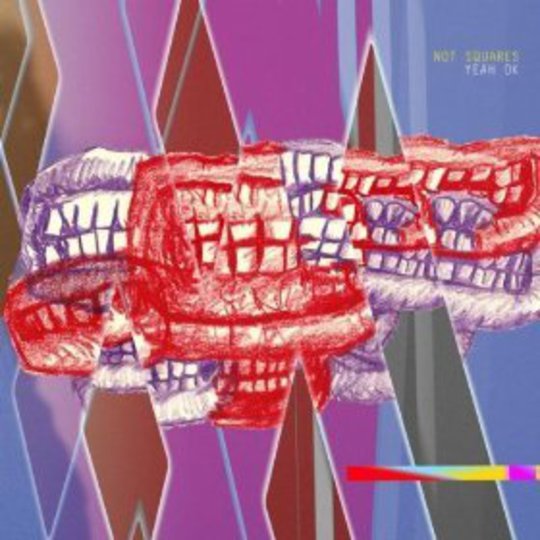 With electronic music, there’s often a balance to be struck. It’s hard to make technology sound human – wires and circuit boards can feel a little cold, and leave you feeling much the same. Unless you’re listening to Kraftwerk or Daft Punk, who like to act or pretend that they aren’t human at all, you still want to get the impression that there is another living, breathing organism on the other side of the stereo.

The problem with ‘Release The Bees’, which opens Yeah Ok by Not Squares, is that it’s hard to connect with in this way. It has the same pulsating techno beat that made ‘Swastika Eyes’ so iconic, but once that hook has consolidated itself, there’s little else there to engage with. The track is two-dimensional, with its poorly judged and woefully obvious demonic, spoken-word sections and bland repetition. The size and intensity of it doesn’t swallow you up like the Primal Scream track does – it just stares ambivalently in your direction.

It’s unfortunate that ‘Release The Bees’ opens this album, because, in fairness, it does give a false impression which is difficult to shake. Because at the other end of the spectrum, there is ‘Asylum’ with its blues-rock riff, rattling hi-hats and repetitive vocals. Punctuating themselves with a cowbell and applying the grammar of post-punk mass shout-alongs, Not Squares construct themselves a neat little new wave verse. They suddenly sound refreshingly authentic, leading the track to a climax that has all the anarchy of a frisky artrock party.

The band mix these two sides of their sound on ‘Bi Kan Na’. There are the same shouty vocals doing battle with rudimentary percussion. But this both contrasts with and complements the noisy bass synth that gives the track is musicality. In totality, the combination is lively and lucid, man at his most instinctive working alongside a machine at its most refined.

Often on Yeah Ok though, there is a piece of the puzzle missing, most obviously on a trio of tracks that starts with ‘Nothing’. Here, Not Squares manage to build some atmosphere into their largely frosty electronics, and this is warmed by a bouncing bass hook. This pattern continues into ‘Yeah!’ and ‘Ojos Para Volar’ with small doses of dynamism. But on the whole, these are not technologically inspired, emotionally engaging passages, and the music can’t help sounding like LCD Soundsystem-lite.

On the whole, Not Squares do have their moments. At times, they have all the succinct, loquacious energy of The Rapture. But for the most part, their music doesn’t have that same level of charisma and is far less enigmatic. Their beats, while they would surely sound great in certain clubs, feel very arbitrary and, at worst, obvious. There is never a sense that only this band could have made this album, which is why, for now, Not Squares will struggle to make an impact.