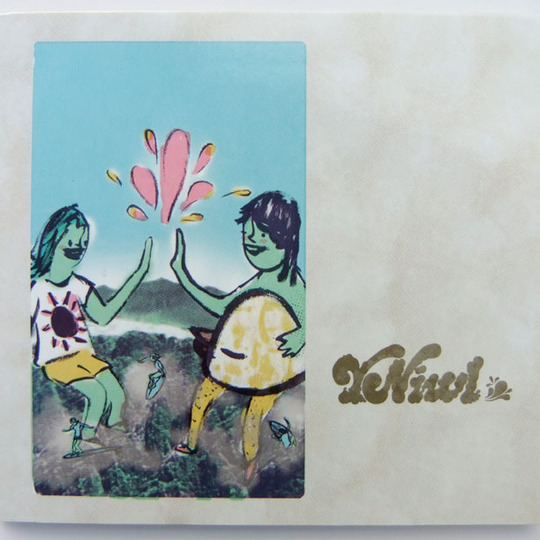 This album, I believe, is the third to be reviewed by DiS in 2010 by a band or person who could be deemed a ‘product’ of the Welsh language rock scene. Y Niwl, Goodbye Falkenberg by Race Horses (née Radio Luxembourg) and the mad and divisive Gruff Rhys & Tony da Gattora album all have another commonality: for people who cut their teeth as part of the SRG, or Sin Roc Gymraeg, there’s scant effort across the board to sing in the native tongue. None at all outside of a couple of Race Horses album tracks, in fact. Insofar as anyone needs an excuse for not singing in one language or another, Y Niwl (in English, The Fog) have a robust one – they’re an instrumental surf-rock band. Not a word passes the quartet’s lips during the album’s 28 minutes, any more than might have on a Dick Dale or Surfaris opus in the salad days of the genre.

There’s no obvious answer to ‘Why are four dudes from North Wales jocking the eternal sound of beach-bound pre-LSD American youth?’ aside from ‘why not?’ Guitarist Alun Evans is better known, in Wales at least, as Alun Tan Lan; to hear the well-crafted if winsome folk-rock he makes by that name is, most likely, to understand why he might wish for an alternative outlet. Conversely, drummer Peter Richardson kept time for Gorky’s Zygotic Mynci during their autumnal years, having previously been in Ankst Records psych-pop sorts Topper, but has been of no real fixed band since – in fact, the long jam sessions from which Y Niwl songs are born probably renders this his most labour-intensive gig since Gorky’s. Considering the band’s homestead, and the fact they play music which was often dismissed as novelty fodder in its heyday never mind now, Y Niwl doesn’t sound like anyone involved is wearing a smirk while playing.

With songs lyricless and titleless – given numbers rather than names, in the order they were written rather than arranged on disc (stoner rock bros might remember Karma To Burn also doing this) – the concept is a purely musical one, and this is a very pure sound. In terms of production, recording and equipment, you’d have to be a very astute gear nerd to know this wasn’t an artifact from the original, ahaha, wave of surf music. It’s a big malted glass of valve amps, dust-infused organ and live taping sans overdubs. Actually, Gruff ab Arwel’s organ sound is probably the least authentic thing about Y Niwl: when it’s especially prominent, such as with ‘Deg’ and ‘Undegdau’, it chainlinks the early-Sixties surf scenes with the garage-into-psych movement of the later part of the decade, in a manner which constitutes a mild rewrite of history. This is fine, obviously: a combo of clean six-string reverb and Strawberry Alarm Clock-ish key-wail is one to grayscale your surroundings with its retroness (in a good way), although it’s hard to shake the feeling that this occasionally resembles the Inspiral Carpets without the vocals.

Combining one specific style of music from almost five decades ago with one birthed in a similar part of the world, a bit less than almost five decades ago, is not in itself a reason to be excited about Y Niwl. There again – thinking of some other notable bands who have also been dubbed ‘surf revivalists’ – the same could be said of Laika & The Cosmonauts, Shadowy Men On A Shadowy Planet and Man Or Astro-man?, who respectively toiled to fuse surf with lounge, punk and pretending to be from space. They all got props because they had the tunes to back up their retroaction, which is also why Y Niwl have managed to accrue an audience featuring people who neither know of or care about Alun Tan Lan’s standing in the SRG hierarchy.