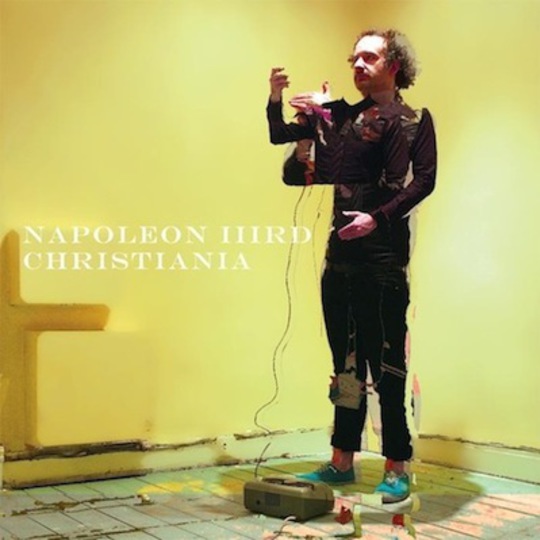 I like to think of Napoleon IIIrd (née James Mabbett) as a variant on the collage artist. Listening to Christiania, it strikes me that his creative process might be a little haphazard – there’s a boundless library of musical sounds and ideas, briefly surveyed by our Emperor before a random selection are snatched from the shelf and thrown into the mixing pot marked ‘oddball pop’. Hardly the most pragmatic approach – but don’t worry, it works.

One of the most telling examples comes right at the beginning of Christiania track number two, ‘Leaving Copenhagen’ – with a cycling up through synthesizer chords before, ‘ah, yeah this key will do it’. And then we’re off into the realms of quasi-political bombast, but more on that later. You can even see the concept of ‘haphazardness’ in the album’s artwork: a picture of Mabbett himself, sure, but if you look closely you’ll find it’s been chopped and changed and cut up and stuck back together again by means of some entry level Photoshop-ing. Not that I’m trying to insinuate that ‘haphazard’ is equivocal to ‘unprofessional’, mind. Despite the mesh and muddle of synthesizer sounds that dominate the record, and the regular intervening of non-instruments and sounds (see: the thumping of makeshift percussion on the militarised ‘This Town’, or the electronic ‘swoosh’ in the background of the incredibly immediate and contagious opener ‘The Unknown Unknown’) it does all collate into a series of coherent and undeniably detailed songs.

So ‘Leaving Copenhagen’, then. It opens with the bawled line “I think I might have political tendencies that sway towards the anarchistic”. I’m not sure I quite get it: there’s a lack of synergy between the language and Napoleon’s lively and original instrumentation. I mean, there’s a time and a place for this sort of unhinged political bombast - the last Muse album, perhaps. But who knows? Maybe the contrast between musical colour and lyrical content is the point? Because, at the same time, the song’s pulsing synth and chorus of “LET’S ALL GO TO CHRISTIA-ANA!” insist that I shouldn’t be surprised if we soon hear it chanted by the masses.

If you have the impression that Christiania is an album full of quirky pop songs handmade and addressed to outsiders everywhere, then you’re certainly attuned correctly, but don’t be under the impression that it’s a record stuck in one gear. Flippant title aside, ‘Guys Just Wanna Have Sun’ is stunning (and evidence that Mabbett can revel lyrics with the sort of dry humour that you can revel in for hours, alongside those that make you wince). With the synthesizer choir blending into a seamless, fluid treacle, Napoleon sings, an uncharacteristically gentle sorrow replacing his regular gravelly bark: “well I know I’m not the type of guy to take his shirt off in the summertime/unless the mood is right/or there’s swimming to be done” – a wry smile of a lyric if ever there was one. It continues: “No one wants to be confronted by a guy in floods of tears in the summertime”. Despite all the life and vivacity that flows through the album, there’s an emotional outlet here too.

It’s okay though - he doesn’t dwell for long. Firm favourite ‘Rough Music’ follows in tow, and as its title suggests, Napoleon has done away once more with the sullen contemplation, and for the last minute or so, paints the most vivid and energetic moment of the entire album. You know every now and then, when you hear a section of a song and you think ‘hey, they should make a whole other song out of that bit, man’? This is one of those.

There’s so much energy and detail in this album, I actually feel bad I can’t provide commentary on every single track. It was maybe an odd narrative to pop into my head, but Christiania left me with an impression of Napoleon IIIrd as some sort of Radio 1 hit-maker who-would-have-been, had he not had a dent put in him so big that it left him walking in circles. But he’s still smiling. You can’t not smile as well. I’m sure it won’t be long before the crowds will be queuing to smile with him.