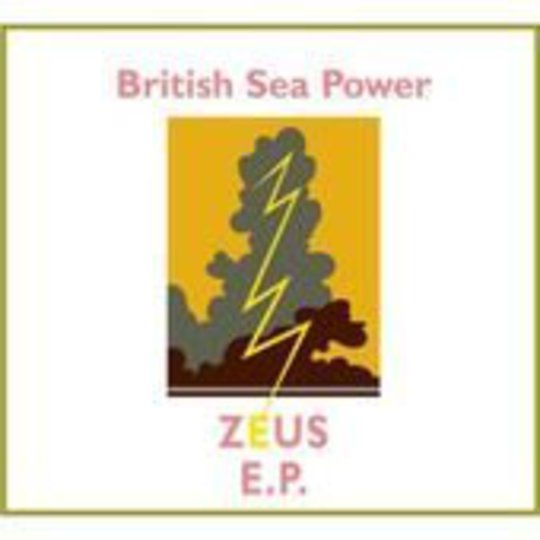 Maybe British Sea Power have cheered up a bit. You can’t blame them, considering how bleak their soundtrack to Man Of Aran, their last major release, was. Admittedly the Man Of Aran soundtrack was bold, beautiful and brilliant, as well as bleak. But even so, you’d understand why the band would want to try and cheer themselves up.

So maybe that explains one or two of the tracks on this new EP, Zeus. Maybe it was an upward mood swing that encouraged them to play about with rock‘n’roll guitars and lacklustre vocals on ‘Can We Do It?’ where a clumsy, slapdash performance suggests that British Sea Power aren’t taking themselves too seriously. Honestly, if there was a band that sounded like this all the time, they’d be terrible. But BSP, somehow, present the track quite convincingly as a fascinatingly half-arsed experiment with being a commercial rock band. It makes you wonder what the hell they were thinking in the studio, and that’s half the fun.

The EP’s final track, ‘kW-h’, leaves you asking the same question. At first listen, you might think a Super Furry Animals track has somehow found its way into the British Sea Power folder on your MP3 player. But no, that Daft Punk vocoder, those stomping, childishly simplistic riffs and that Rick Wakeman-style keyboard breakdown really is the same band that wrote ‘Lately’ and ‘Waving Flags’. Again, the track makes you wonder how it even came about, but there’s real joy to be found in knowing that such a respected band had a song as ludicrous as this in them.

British Sea Power tread more familiar ground on ‘Bear’ – a typical ballad for them, with distant horns and delicately strummed guitars. That said, this straightforward composition is developed by the addition of a Muse-style keyboard pattern at the coda. It’s a progression that sounds far from natural for the band, and the more prominent the electro sound effects become, the less like themselves BSP sound. Of course, this can be allowed, as it’s clear by now that Zeus is an EP of experimentation.

The title track is embellished with whirring indie guitars that have been borrowed from The Maccabees’ last album. There are silly lyrics about Rick Stein before one line, “I really hope that we can come here again”, is repeated over and over above a crescendo that flirts with stadium rock.

Later, ‘Cleaning Out The Rooms’ finds BSP at their most Arcade Fire, full of understated sentiment, tight strings and clunking piano. This track’s strength lies in its minimalist beauty which makes it hard to understand, five minutes in, how it got so noisy and complicated when it still feels, fundamentally, like nothing has changed.

The only genuinely weak point of Zeus comes with ‘Mongk’, which reprises ‘Spearing The Sunfish’ from Man Of Aran. The same screeching musical refrain and relentless rhythm are there, but it lacks the punch, the organic, industrial energy of the cinematic version, which makes it a far less stimulating listen.

This, however, can be forgiven, because with Zeus British Sea Power have done nothing to shake off their label as one of contemporary indie's great innovators. It might feel sometimes that their experimentation is misguided, and the overall consequence of cramming so many ideas into half an hour does make Zeus a disjointed listen. But it also makes Zeus a healthy record to listen to at this stage in British Sea Power’s career, as they work out which exciting new journey they will take their audience on next.