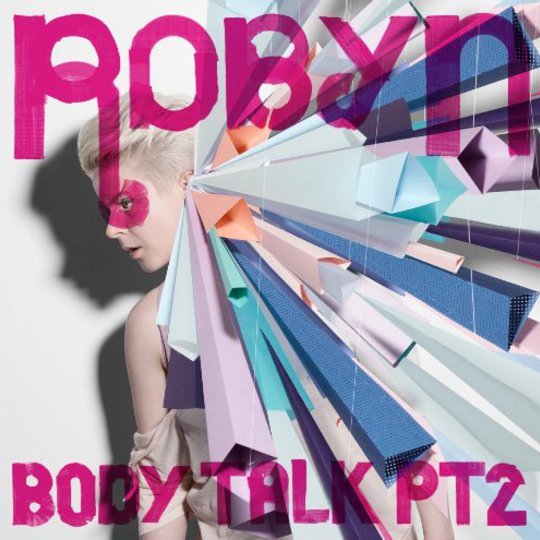 Robyn's appeal is not difficult to pin down. Since her re-emergence from the Nineties Europop assembly line with her eponymous re-debut (2005's Robyn), she's pretty much served as the poster child for late-Noughties 'post-pop' - as the commercial music machine continues to crumble, artists with pop sensibilities are taking the genre and creating creative, singular works with artistic intent, freed from the financial censorship they would have once been subject to. And Robyn is the undisputed queen of this movement; a blonde, Swedish Grace Jones towering over every other would-be independent pop star, combining a fearless willingness to express herself with unparalleled sensibilities honed by a half a life of collaboration with the Swedish pop royalty of the bad old days.

In indie circles, Robyn's output tends to be celebrated more for its outré moments than its conservative ones . Think back to 'Konichiwa Bitches' from Robyn, or even 'Dancehall Queen' from Body Talk (Part 1). The story goes as follows: 'Robyn is free to take chances which the majority of commercial pop would avoid/she does some pretty batshit stuff and manages to get away with it /Rapping with a Swedish accent, doing pastiche-Abba dancehall with Diplo/Belting out acoustic covers of Swedish folk songs/Rianna would never do anything like this/Indie music is just better, I can continue to ignore the majority of commercial pop/Robyn is so cool'.

This narraitive, I would argue, overlooks two points. The first is that commercial pop is no longer that far off from Robyn. Almost all of the moves Robyn has pulled off to win the heart of indie listeners have been copped successfully by the likes of Rhianna, Ke$ha, Justin et al; commercial pop, due to the state of the industry or possibly just due to evolution, is getting weirder and weirder; its best moments have arguably already caught up to our Swedish protagonist (and Gwen Stefani has had hits which are FAR stranger).

The second point about Robyn which the traditional narraitive overlooks is the Songs. For every 'Konichiwa Bitches' or 'Cobrastyle', Robyn had roughly two low-key, masterfully crafted, near-perfect pop songs. 'Handle Me', 'Be Mine', 'With Every Heartbeat', 'Who's That Girl'... the list goes on. All of these are good enough to compete on a sheer melody, craft, and structure basis with anything the Nineties pop machine produced. They're also better than the majority of commercial pop today - no matter how much effort and cash the industry throws at Gaga or Ke$ha, they don't have too many songs that can touch these ones, especially not in a row on one album. Robyn, then, was not only a brilliant example of loon-pop at its finest, it was also one of the most consistently brilliant pop albums of the decade.

Body Talk (Part 1), the first of Robyn's three-volume, eight song a piece follow up to Robyn, had enough 'creative' moments to ensure Robyn's appeal could remain intact with the indie plutocracy. It also had a solid share of the spectacular, low-key pop bangers which for me constitute the true glory of Robyn's output. 'Dancing On My Own' is a song which could suitably be included in a NASA space probe alongside those creepy embossed pictures of naked human beings as being emblematic of the best of what our early 21st century society can produce.

Body Talk (Part 2), however, marks a bit of a departure from Robyn's previous formula of 'creative' tracks sprinkled through with low-key pop gems. Out of the blue here she's taken up a bit of a space disco pose, a fairly bold stylistic move. While her previous work was certainly high-tech, things are a tiny bit faster here, sprinkled with italo-sounding synths, arpreggios and minor-key arrangements ('In My Eyes', 'Include Me', 'Love Kills', and 'We Dance to the Beat' all fit this formula, and bear more than a passing resemblance to a structured version of Lindstrom and Christabelle's Real Life is No Cool). 'Criminal Intent' is textbook Creative Robyn, her gangster rap obsession coming to the forefront and on 'U Should Know Better', Robyn actually collaborates for the first time with a real honest-to-goodness Rapper, her R-Kelly-esque sing-rap flow actually standing up pretty well beside Snoop despite the fairly lightweight subject matter (We are in Europe/Don't fuck with us).

The Pop moment on this album, the 'oh shit' moment I was waiting for, is 'Hang With Me', a track that stands up to not just anything Robyn's done before, but anything anyone's done before. Debuted as an acoustic version on Body Talk (Part 1), it's slightly too good to even attempt to explain. The album closes with another acoustic version, an orchestral arrangement of 'Indestructible', a song which, when fleshed out on Body Talk (Part 3), is probably going to approach 'Hang With Me' for sheer pop bangerdom.

How does this album stack up to Robyn's previous output? While it's a fairly remarkable piece of craft, her icy disco diversion here leaves me somewhat flat. The album is no Robyn and it doesn't quite match Body Talk (Part 1) in terms of the sheer number of highs. It should satisfy the listeners who primarily show up for Creative Robyn. However in terms of the pure pop moments which for me constitute the heart of Robyn's true appeal, we really only have one here, and while it's spectacular, it leaves me wanting more.